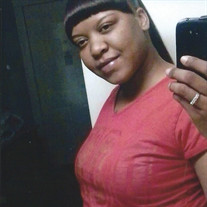 Zhanay Jacobs, 32, of Columbia, slept into the arms of Jesus on Tuesday, December 19, 2017, at Boone Hospital. Funeral services will be held on Saturday, December 30, 2017 at St. Luke United Methodist Church at 2:00 PM. Visitation will be from... View Obituary & Service Information

The family of Zhanay Javonne Jacobs created this Life Tributes page to make it easy to share your memories.

Zhanay Jacobs, 32, of Columbia, slept into the arms of Jesus...

Send flowers to the Jacobs family.