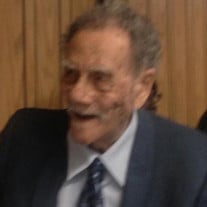 Zenas Bright, 92, of Kansas City, MO., formerly of Columbia, MO., passed into the arms of Jesus on Thursday, March 2, 2017 at Kansas City Hospice House. Funeral services will be held on Friday, March 10, 2017 at 12 PM at Duane E. Harvey Funeral Home in Kansas City. A visitation will be held from 11 AM to 12 PM on Friday at Duane E. Harvey Funeral Home. Another visitation will be held on Saturday, March 11, 2017 from 11 AM to 12 PM at the H.T. May and Son Funeral Home in Columbia. Mr. Zenas Bright, 92 of Kansas City, Missouri passed away, March 2, 2017, at the Kansas City Hospice House. Zenas was born on April 17, 1924 to the late Mrs. Lucille Crosswhite (Hayden) deceased. He graduated from Frederick Douglass High School and later united in marriage to Doris McKee (deceased). From 1943 to 1946 he served in the United States Navy and in World War II. He was employed and retired from the United States Postal Service. Mr. Bright leaves to cherish his memory one daughter Delores Bright-Alexander (Nathaniel), four granddaughters, five grandsons, one brother Terry Palmer-Bright, one sister-in-law Mary McQuitty, a host of nieces, nephews, cousins, 19 great grandchildren, and six great great grandchildren. He was preceded in death by his parents, wife, daughter Teresa Ann Burke, son in law Clyde Andrew Burke, and one grandson Derek Leroy Carlock.

The family of Zenas Bright created this Life Tributes page to make it easy to share your memories.

Send flowers to the Bright family.