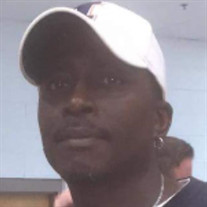 Willie Stokes,52, of Columbia, MO., passed away at his home, surrounded by loved ones. Funeral services will be held on Saturday, November 4, 2017 at H.T. May and Son Funeral Home in Columbia at 5:00 PM. Visitation will be from 4-5 PM Saturday at the funeral home. On August 18, 1965, Willie Ray Stokes was born to the parents of Rosie Lee Ross Jackson and Jeffrey Wesley Stokes in Charleston, Mississippi. Willie attended East Saint Louis Public Schools and graduated from East Saint Louis High School. Willie professed his love for Christ and accepted the Lord at an early age. Later he was baptized at Jerusalem Missionary Baptist Church in Saint Louis, MO. As a child, Willie’s love for music was nurtured as he was in the church choir. Willie was in love with the smooth sound of soul music and Rhythm and blues, loved shining his cars,and he enjoyed cooking for his loved ones and excelled at working around his house with his hands. He could fix anything. Willie was known as a hard worker and made a huge impact on his fellow employees. He was most recently employed at Watlow, Inc. Willie grew up with nine brothers and sisters and knew the importance of family. Willie loved his family and friends, as was evident by his free spirit, warm heart and joyful demeanor. He enjoyed living and experiencing the joys of life. Much of Willie’s free time consisted of exchanging laughs with family and friends at his home. He was the epitome of a “people person”, was an loyal Denver Bronco’s fan, and was most proud of being a father and grandfather. On October 30, 2017 God requested a face to face with his son---Willie relocated to his heavenly home. It is now well with his soul. Even though he is no longer present on earth, he will remain forever engrained in our hearts, thoughts and spirit, as Willie relished living “the good life!” He was preceded in death by his father Jeffrey Wesley Stokes, and mother Rosie Lee Jackson. He was also preceded in death by his grandparents David and Florida Ross He leaves to cherish his memory; wife, Cheryl Stokes; four children, Robin Winn, Willie Jackson both of St. Louis, MO, Diamond Stokes of Columbia, MO., and Rayven Stokes of Jefferson City, MO.; Two stepchildren, Brandon Weldon and Bradley Weldon of Mexico, MO.; six grandchildren, Willondra Jackson, Silas Brookins, Evan Weldon, Kaylin Weldon, Kadyn Weldon and Gavin Weldon; stepfather, Steve Jackson of Gulfport, MI.; Nine siblings, Calvin Stokes, Venethia Moore, Darryl Stokes, Steven Jackson all of St. Louis, MO., Talley (Deborah) Jackson of Oklahoma, Rosa Jackson of St. Louis, MO., Veronica (Mark) Peebles of North Carolina, Jonny Jackson and Jennifer Jackson both of St. Louis, MO.; grandmother, Ozzie Lee Stokes, Water Valley, MI; mother-n-law, Loretta Spires; sister-n-law, Cathy Drew; brother-n-law, David Walden all of Mexico, MO.; best friend, “Archie”, aunts, uncles and a host of nieces, nephews, relatives and friends

Willie Stokes,52, of Columbia, MO., passed away at his home, surrounded by loved ones. Funeral services will be held on Saturday, November 4, 2017 at H.T. May and Son Funeral Home in Columbia at 5:00 PM. Visitation will be from 4-5 PM Saturday... View Obituary & Service Information

The family of Willie Stokes created this Life Tributes page to make it easy to share your memories.

Send flowers to the Stokes family.