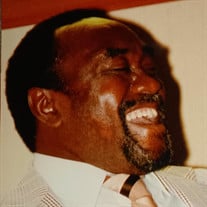 William Harvey Richardson, Sr. was born August 8, 1937, to Jacob Richardson, Sr. and Mary Jane Warfield Richardson in Columbia, Missouri. Mr. Richardson, also known to many as “Rocket” and “Big Mare” among other nicknames, departed this life January 2, 2022, in Kansas City, Missouri. William attended Frederick Douglass High School in Columbia, Missouri where he excelled in football, track and field and diving. He graduated, in 1957, from Douglass High School having earned All State in Football. William was also one of the first African Americans to receive a football scholarship to the University of Missouri that same year. He went on to Fort Scott Junior College in Kansas to earn the title of National Junior College Athletic Association for indoor track and field. Also in 1957, the Downtown Optimist Club and the Columbia Missourian sponsored “Athlete of the Year” and William was named the Best High School Athlete as Douglass High’s three-sport star. In his years after college, William participated in Columbia’s Park and Recreation Department softball leagues. He was an avid hunter, fisherman, bowler and lover of sports. William worked at Columbia’s City Public Works Department where he retired, after many years of employment. He was a member of Sugar Grove Baptist Church in Columbia, Missouri, where he served on the usher board. Cherishing his memory and mourning his passing are a sister, Charlene Burnett of Kansas City; five children, Bonetta Lewis of Kansas City, Anthony Curtis of Columbia, Lorinda Cockrell (Bruce) of Houston, TX, Althea Bivens of Houston, TX, Kendra Richardson of Phoenix, AZ and son William H. Richardson, Jr. of Columbia preceded him in death; and a host of grandchildren, great grandchildren, cousins, nieces, nephews, and great nieces and nephews, and friends. He was also preceded in death by his parents, four sisters, seven brothers, a half-sister, one foster brother and a granddaughter. Services will be Saturday, January 22, 2022, at Fifth Street Christian Church, 401 N. 5th Street, Columbia, Missouri 65201. The viewing/visitation will be from 11 a.m. to 12 p.m., funeral to follow at 12 p.m.

The family of William H Richardson created this Life Tributes page to make it easy to share your memories.

Send flowers to the Richardson family.