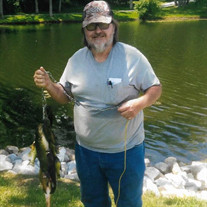 Wayne Gerard Sr., 64, of Blackwater, passed away on Friday, October 13, 2017, at his home. A memorial service will be held on Wednesday, October 18, 2017, at 5 PM at H.T. May & Son Funeral Home in Boonville. Wayne Gerard was born on June 24, 1953, in Longwood, Florida, the son of Lorene Johnson and Joseph Gerard. He grew up in Longwood, Florida. He married Melva Jane Kellum on April 4, 1972 He went on to work at Dog Kennels with greyhounds. He also did plumbing work and construction. He moved to Snowball, Arkansas in 1974 with his family and built a home. At that time he went on to work for the Wisconsin Barge Line. In 1982 he moved to Marshall, Arkansas and opened up his own welding repair shop. In 1988 he moved to Blackwater Missouri at this time he was a truck driver and drove for G&R Trucking. He drove over 20 years before he was disabled. Wayne loved to hang out in his shop and work on small projects for himself and other neighbors. He would not hesitate to stop what he was doing to help someone in need. He loved to go to auctions, go to the river to fish, and play horse shoes with his best friends. Survivors of Wayne Gerard Sr. are his wife Melva Jane Gerard, his sons Joseph Gerard, and Wayne Gerard Jr. All live in Blackwater. One Sister Joanne Holbrooks of San Antonio Texas. Two brothers, Jackie Gerard of Marion Kentucky, and Jerry Gerard of Houston Texas. Several Grandchildren. He was preceded in death by his parents Joseph and Lorene Gerard. One brother Larry Gerard, two sons, Matthew Gerard and James Gerard. One daughter Sandy Switzer.

The family of Wayne Gerard Sr. created this Life Tributes page to make it easy to share your memories.

Wayne Gerard Sr., 64, of Blackwater, passed away on Friday, October...

Send flowers to the Gerard family.