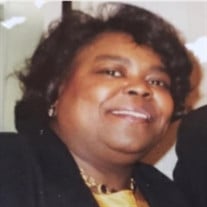 Vernice Renee Harris, 62, passed away on Sunday, October 31, 2021, at University of Missouri Hospital in Columbia. Funeral services will be held at 12PM on Friday, November 12, 2021 at St. Luke United Methodist Church. Visitation will be from 11-12PM Friday at the church. Another Service will be held on Saturday, November 20, 2021 at 11:00 AM at Mt. Sinai Baptist Church in Kansas City, with the visitation from 10:00 AM to 11:00 AM that morning at the church. Vernice Renée Harris was A Wife, A Mother, A Sister, An Aunt, Cousin & Friend. She was the Fifth Born Child of Seven. Mother RosaLee Smith and Honorary Father William Parker Sr. Unfortunately, on October 31, 2021 she transitioned from The University of Missouri Hospital in Columbia, MO at 3:50 p.m. Post complications from a car accident several weeks earlier. She was raised in Kansas City, MO Attending Central High School where she received her G.E.D. She attended Culinary Art School obtaining her Chef Certificate. Renée was An Incredible Warrior on this Journey called Life. She truly Loved & Enjoyed being w/ her Family & Her Morning cup of coffee. She used to be The Matriarch whom facilitated our Annual Thanksgiving Dinner’s until she passed over the fork. Renée was A Believer In JESUS CHRIST and enjoyed Praising The LORD, she was saved at an early age She enjoyed traveling, being the life of the Party & driving for a living. While residing in Las Vegas, NV She drove The Trolley. Renée moved to Columbia, MO meeting The Love of her Life Mr. Ben Harris where they joined hands in Holy Matrimony. She retired from Student Transportation Of America as a Bus Driver on March 14, 2021 where she started August 10, 2015. She is Preceded in death w/ Mother RosaLee Smith, Honorary Father William Parker Sr., Her Big Brother Donald “Duck” Bishop. Her Nephews Manual Lars, Rodney Richardson, Niece Brandy Cooper. She will be truly missed by her entire Family Husband Lawrence Harris of Columbia, MO Her Two Sons Shannon “Shawn” Marcus Parker, Nathaniel DeWayne Sanders & Her (Bonus) Daughter Joyce Bradford. She was Blessed w/ Seven (+) Grandchildren & A Host of Great Grandchildren. Siblings: Mary Harvey (Roscoe) of Long Beach, CA, Patricia Parker of Kansas City, MO, William Parker of Kansas City (Honorary Sis.N.Law Genevieve of Atlanta), George Morris of St. Louis, MO, (Honorary Sis.N.Law Stacey) & Denise Morris of Kansas City, MO (Honorary Bro.N.Law Earl Battee), Six Sister-in-Laws & Three Brother-in-Laws, Her Best Friends that became Sister’s Marian & Birdie, Her Host of Nieces (Honorary & all), Nephews Cousin’s & Friends until we meet her again. Stay Encouraged In The LORD.

Vernice Renee Harris, 62, passed away on Sunday, October 31, 2021, at University of Missouri Hospital in Columbia. Funeral services will be held at 12PM on Friday, November 12, 2021 at St. Luke United Methodist Church. Visitation will be from... View Obituary & Service Information

The family of Vernice Renee Harris created this Life Tributes page to make it easy to share your memories.