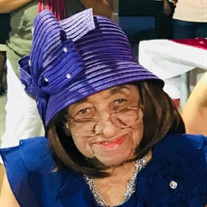 Verneile Jones, 99, of Fulton, MO passed away on Tuesday, March 9, 2021 at her home. Services will be held on Saturday, March 20, 2021 at 2:30 PM at Victory Fellowship in Fulton, Missouri. Visitation will be from 1-2:30 PM at the church on Saturday. Verneile Elizabeth Jones, 99 yrs. old, was called home on March 09, 2021, at her home in Fulton, Missouri, surrounded by her family. Ms. Verneile, as everyone called her was born on Aug. 22, 1921 to the late Lillian (Bagby) (Newsome) Chambers and the late Robert Dewey Newsome. She was married to Jasper Simmons and later married to Wilbur Jones of whom both preceded her in death. Verneile joined Calvary Baptist Church as a young child and was faithful to Calvary throughout her entire life. Verneile attended North School (Carver) grade school in Fulton, MO and later attended Lincoln Lab High School in Jefferson City, MO. She worked for the University of Missouri, Columbia in food service for many years and later worked in food service for Fulton State Hospital. In her retirement she worked for the Foster Grandparent Program which she really loved, and the children loved her equally. Verneile loved her huge family, and if they were happy, she was happy. She enjoyed reading, watching her favorite programs, decorating her house, working out crossword puzzles, scrapbooking, reciting poetry, reading poems by Maya Angelou, wearing hats, and non-stop ordering from catalogs. Verneile loved barbecues and fish fries in her back yard, with lots of music, food, family, and guests. Preceding her in death was her father Robert Dewey Newsome, her mother Lillian Chambers and stepfather Esau Chambers, her sister Roberta Vaughn, her brother Dewayne Chambers, her son Elmer Simmons, stepson Carl Simmons,... especially her friends Ms. Fat, and Ms. Pauline. Left to cherish her memory are her brother Richard Chambers of Fulton, MO, her brother Ronnie Chambers (Roberta) of Evanston, IL, her children Robert Simmons (Annabelle) of Columbia, MO., V’Esser Simmons of Kansas City, MO., William Simmons of St. Louis, MO., Kenneth Simmons (Rita) of Fulton, MO., Bettye Smith (Arthur Jackson) of Fulton, MO., Thomas Simmons (Donna) of Fulton, MO., Ginger Colbert (Gregory) of Kansas City MO., Inez Ramclam of Fulton, MO., and Donald R. Simmons (Kim) of Chicago, IL., her stepdaughter, Loretta Montgomery (Ronnie) of Dyersburg, TN, her step-son, Andre’ McCoy of West Bend, WI, her step-son, Terrell Winbush of Brownsville, TN, . She also leaves to cherish her memory her sister-in-law Mattie Chambers of Jefferson City, MO, and a host of grandchildren, great-grandchildren, great-great grandchildren, many nieces, nephews, cousins, and family friends. She will be missed by all that knew her and loved her especially her cats Tarzan and Tabby.

Verneile Jones, 99, of Fulton, MO passed away on Tuesday, March 9, 2021 at her home. Services will be held on Saturday, March 20, 2021 at 2:30 PM at Victory Fellowship in Fulton, Missouri. Visitation will be from 1-2:30 PM at the church on Saturday. Verneile... View Obituary & Service Information

The family of Verneile Jones created this Life Tributes page to make it easy to share your memories.

Verneile Jones, 99, of Fulton, MO passed away on Tuesday, March...