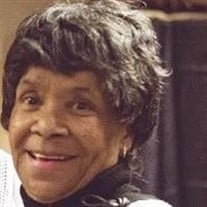 Verlee P Henderson, 80, of Fulton slept into eternal rest on Sunday, May 21, 2017 at her home. Funeral services will be held on Saturday, May 27, 2017 at Second Christian Church in Fulton at 3:00 PM. Visitation will be held on Saturday from 1-3 PM at the Church. Graveside services will be held Tuesday, May 30, 2017 at the Southside Cemetery in Fulton at 10:00 AM. Verlee P Henderson was born of January 25, 1937 in Columbia, MO. the daughter of Arthur and Tessie Logan Nichols. She married Howard Henderson on April 18, 1954 and he preceded her in death on May 21, 2008. She leaves to cherish her memory three daughters Donna Galbreath of Fulton, MO., Ruby Henderson(Tony Galbreath) and Tamara (Floyd) Turner both of Columbia, MO., three sons Dennis (Tania) Henderson of West Palm Beach, FL. Master Sgt. , USA retired Lorenzia (Debra) Henderson of Woodbridge, VA., and USA Staff Sgt. Leslis (Bobbie) Henderson of Kapolei, HI., one sister Rosie Gillette of Fulton, MO., fifteen grandchildren and twelve great-grandchildren. She was preceded in death by her parents, one sister Ella Steward and two brothers.

The family of Verlee P Henderson created this Life Tributes page to make it easy to share your memories.

Verlee P Henderson, 80, of Fulton slept into eternal rest on...

Send flowers to the Henderson family.