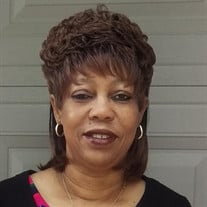 Valerie “Debbie” Hurt Moore, 64, of Jefferson City, MO, formerly of Boonville, MO, passed away on Thursday, August 5, 2021 at the University of Missouri Hospital. Services will be held on Saturday, August 14, 2021 at 12:00 PM at HT May & Son Funeral Home in Boonville. The visitation will be held from 11:00 AM to 12:00 PM at the funeral home. Services will be live-streamed through Facebook on Saturday, August 14, 2021, at 12:00 PM at https://www.facebook.com/htmayfuneralhome. Valerie "Debbie" Hurt Moore was born on May 13, 1957 to the union of Leola Hurt and Henry Prezell Hurt Sr., which proceeded her in death. In her early childhood she moved with her family to Boonville, Missouri. After high school she pursued a career in nursing and moved to Jefferson City, Missouri where she later married Bill Moore. Anyone that knew Debbie knew that the boat (Isle of Capri) was her favorite pastime. She was always hitting jackpots and they would let her take it. She also enjoyed shopping and giving to others. Debbie worked for 30 plus years for numerous places including: Colonial Garden, Cooper County Hospital, St. Joseph's Hospital, River Heights, Rest Haven and Heisinger Bluffs. Debbie was a devoted mother and grandmother and loved her daughter and granddaughters dearly. Debbie was preceded in death by her husband Bill Moore, her mother and father, grandparents, and brother David "Terry" Hurt. Debbie leaves to cherish her memories one daughter Patricia Hurt, grandkids Jayla, Jordan and Jeniya Howard all of Jefferson City, Missouri, two brothers Henry P. Hurt III (Theresa), James Hurt and two sisters Thelma Quint (James Earl), Penny Hurt all of Boonville, Missouri. She also leaves five auntie's: Aunt Alberta Jackson, Aunt Eunice Wright, Aunt Margie Butler, Aunt Patricia Graham and Aunt Dr. Frankie Bell Cooper, uncles Jack Cowans, Russell Jackson, Homer Cowans, and Chris Cowans, great uncle Jackee Andrews and a host of relatives and friends.

The family of Valerie “Debbie” Moore created this Life Tributes page to make it easy to share your memories.

Send flowers to the Moore family.