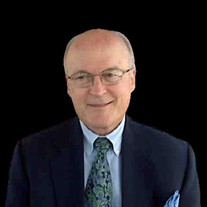 Richard Thomas Wood II died October 1, 2020, at the age of 77. Tom was born November 1, 1942, in Long Beach, California. He grew up in the Westchester area of Los Angeles and, as the son of a Hughes Aviation engineer, Tom had the unique opportunity to witness the one and only flight of the infamous Spruce Goose. He graduated Westchester High, UCLA, and the University of San Diego Law School, cum laude. He married Barbara Jane Cox in 1964. Tom was the first-ever law clerk for the San Diego County District Attorney’s Office, and upon graduation, worked as a Deputy District Attorney. Later, Tom moved into private practice with Feist, Vetter, Knauf and Loy in Oceanside. In 1974, he opened his own private practice in Carlsbad, California, and specialized in wills, trusts, probates and property law. Tom was active in the Carlsbad community, spending many years in Rotary International, starting the Carlsbad Educational Foundation and volunteering as Judge pro tem with the San Diego County Court. Tom was faithfully devoted to Carlsbad Community Church, singing in his beloved choir and serving on the church Board of Elders several times. Tom also loved to golf and played a weekly round for many years. Because of illness, Tom retired in 2012, and he and Barbara later moved to Hays, Kansas. Tom will be missed by his wife of 56 years, Barbara Wood of Hays, Kansas, his son, Richard Thomas Wood III, daughter-in-law, Shawn Wood and grandson, Richard Thomas Wood IV of Cheney, WA, his granddaughter, Kaitlyn Renee Wood of Sacramento, California, his daughter, Katherine Anne Wolfe, son-in-law Charles Wolfe and his grandson, David Lewis Wolfe of Hays, Kansas. Tom was known by many as a man of integrity, kindness, wit and deep faith. Though Alzheimer’s eventually robbed him of his memories and abilities, it never took away his faith in His Savior, Jesus Christ. There will be a private family service at a later date. Memorials may be given to the Alzheimer's Association. https://act.alz.org/site/Donation

Richard Thomas Wood II died October 1, 2020, at the age of 77. Tom was born November 1, 1942, in Long Beach, California. He grew up in the Westchester area of Los Angeles and, as the son of a Hughes Aviation engineer, Tom had the unique opportunity... View Obituary & Service Information

The family of Tom Wood created this Life Tributes page to make it easy to share your memories.

Send flowers to the Wood family.