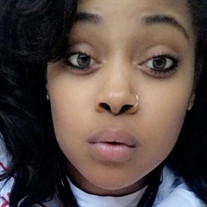 Ti’Ania Ross, 25, of Topeka, KS, slept into the arms of Jesus on Sunday, April 15, 2018, at Stormont Vail Hospital in Topeka. Services will be held at 2 pm on Tuesday, April 24, 2018, at Linn Memorial United Methodist Church in Fayette. The visitation will be held from 1-2 pm at the church. Ti’Ania “Reddy” Ross entered her eternal rest on April 15th, 2018 in Topeka, Kansas. Reddy, as she was known to many, was born January 21st, 1993 in Columbia, Missouri to Estelle McKee and Thomas Ross. She grew up in Fayette and later made her home in Topeka, Kansas where she graduated high school. Reddy enjoyed being with her family and friends despite battling the disease Sickle Cell Anemia. On March 7th, 2018, she gave birth to a son, De’Vronn Blake Miller who survives. Besides her parents Estelle McKee (Travis) and Thomas Ross (Katrina), survivors include maternal grandfather Leroy McKee (Fayette, MO), paternal grandmother Hazel Ross (Topeka, KS), two sisters Tae’Andra Ross (Las Vegas, NV) and TraVosheon Lee (Fulton, MO), one brother Jalen Ross (Topeka, KS), and one niece A’Ziah Hickem (Las Vegas, NV). She also leaves aunts Oneida Jones-Harris an Belinda McKee (Fayette, MO), and Valerie Collins (Lee’s Summit, MO), uncle Brad McKee (Fayette) and numerous other family members and friends. She was preceded in death by her maternal grandmother Maxine McKee, paternal grandfather Thomas Ross and a niece Jeriyah Hickem. Sunday April 15th Ti'Ania aka Reddy fought her last battle. She was a warrior and stood up against sickle cell for 25 years. She did not let her illness stop her from living her life. She stood strong until her very last breath. While no one is ever prepared mentally for death at times we are not prepared financially either. On behalf of Reddy and our family I am asking for donations of any amount to help with burial expenses. Reddy leaves behind her son De'Vronn of just 6 weeks. Donations can be made at https://fundthefuneral.com/tiania-ross

The family of Ti’Ania Ross created this Life Tributes page to make it easy to share your memories.

Send flowers to the Ross family.