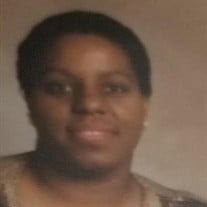 Thieland Abigail Crews Onyenwere 59, of Columbia, MO passed away on Thursday, September 2, 2021 at the University of Missouri Hospital. Services will be held Saturday, September 11, 2021, at 11:00 AM at St. Luke United Methodist Church in Columbia. Visitation will be from 10-11 AM at the church, Also on Saturday. Services will be live-streamed through Facebook on Saturday, September 11, 2021, at 11:00 AM at https://www.facebook.com/htmayfuneralhome. Thieland Abigail Crews, daughter of the late Mr. and Mrs. Russell Lee and Alice Mae Crews (whom proceeded her in death) was born November 22, 1961 in Columbia, Missouri. She attended public school in Monroe City, Missouri and attended Strawn Nursing School in Columbia, Missouri, where she became a Licensed Practical Nurse. Volunteerism was near and dear to Thieland’s heart. She learned at an early age that freely giving time and labor to her community was a golden rule -that was preached by her mother. Over the years she has volunteered many places in many different areas. The one she felt closes to was The Salvation Army. She volunteered for over 15 years with The Salvation Army helping disaster survivors, helped feed the hungry and brightened the holidays with the Christmas Center. In this she was rewarded with a plaque stating that she had raised one of the historically-largest amounts of food in their history. Thieland grew up in rural Missouri where she lived on a farm where she was able to learn nurturing and caring, while taking care of a whole host of animals- such as cows, horses, chickens, goats, sheep and multiple of other animals. After becoming a nurse Thieland worked at the Candle Light Lodge and for the University Of Missouri. She worked diligently to make a positive impact on her patients, so much so she met Devear Redden while working.  Subsequently,  they have been together for the past 31 years with 3 children. As a result of her generous spirit and pleasant personality, she was loved by many. She had a great influence on many and will forever remain in the lives of all who knew her. She departed this life Thursday September 2, 2021 at University of Missouri Hospital after a lengthy illness. She was preceded in death by her son Christopher Allen Crews and her daughter, Amanda Lee Crews, as well as 2 brother Allen lee Crews and Roy Chester Abbey. Her beautiful life will forever be cherished in the lives of her children: Patrick Crews, Scottie Crews, Devanta & Austin Redden and Shianne Redden of Columbia, Missouri. And Grandchildren: Cordell Crews and  Jamarii Crews. Three sisters Alice Crews, Kathryn Crews, and Regina Crews of Columbia, Missouri. Two brothers Russell Thomas Crews of Myrtle Beach, South Carolina and Timothy Wright of Columbia, Missouri as well as many nieces and Nephews, Cousins, Aunts and Uncles, friends and co-workers.

Thieland Abigail Crews Onyenwere 59, of Columbia, MO passed away on Thursday, September 2, 2021 at the University of Missouri Hospital. Services will be held Saturday, September 11, 2021, at 11:00 AM at St. Luke United Methodist Church in Columbia.... View Obituary & Service Information

The family of Thieland Onyenwere created this Life Tributes page to make it easy to share your memories.

Send flowers to the Onyenwere family.