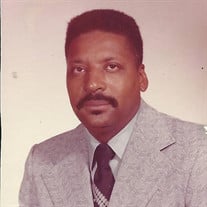 Theodore Walter Brown Jr., 86, of Columbia, earned his wings transitioning from labor to reward on Wednesday, March 13, 2019 at University Hospital in Columbia. He was surrounded by his four children, who he referred to as his four shining lights. Funeral services will be held at 1 p.m. Tuesday, March 19, at St. Luke United Methodist Church in Columbia, with Rev. John Rice officiating. Burial will be at Sunset Hills Cemetery in Boonville. The family will receive friends from 5 to 7 p.m. Monday, March 18, at H.T. May and Son Funeral Home in Boonville, and from 11:30 to 1 p.m. Tuesday at St. Luke United Methodist Church. He was born on December 11, 1932 in Boonville to Lorene Gillum and Theodore Walter Brown Sr. He was raised by his aunt, Helen Brown, who he affectionately called Momma. He attended Charles H. Sumner High School in Boonville and served in the U.S. Army in the Korean War. He was employed at University of Missouri-Columbia and retired after 36 years of service in 1996. He was united in marriage to Anna Virginia Turner on June 14, 1957. They had five children. He was a member of St. Luke United Methodist Church, where he served as Pastor’s Aide to Rev. Raymond Hayes, Emeritus and current pastor, Rev. John Rice. He was a member of the Usher Board and Methodist Men, and he supported several church auxiliaries. He would always carry gifts for young and old alike. He was always a cheerful giver and a role model to many. Survivors include his daughters, Vicky Moore of Bridgeton, Vanessa Haywood of Blue Springs, and Venetia Brown of Columbia; his son, Nathaniel “Nate” Brown of Columbia; his sister, Janet Coleman of Boonville; his cousin, Henry Brown of Boonville; his niece, Belva Byers of Kansas City; nine grandchildren; one adopted granddaughter, DeShayda Bradford of Columbia; 18 great-grandchildren; and one great-great-grandchild. He was preceded in death by his parents; one son, Theodore Walter Brown III; and one brother, Richard H. Brown.

Theodore Walter Brown Jr., 86, of Columbia, earned his wings transitioning from labor to reward on Wednesday, March 13, 2019 at University Hospital in Columbia. He was surrounded by his four children, who he referred to as his four shining lights. Funeral... View Obituary & Service Information

The family of Theodore Walter Brown Jr. created this Life Tributes page to make it easy to share your memories.