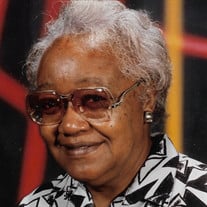 Shirley Harvey, 82, of Fulton, slept into the arms of Jesus on Friday, April 13, 2018, at her home. A memorial service will be held on Saturday, April 21, 2018, at 4:00 PM at the HT May & Son Funeral Home in Columbia. Shirley Nanjoe Harvey, was born June 7, 1935 to Sarah and Homer Richmond and went Home to be with the Lord on April 13, 2018 at the age of 82. Shirley Harvey was born in Fulton, Missouri and graduated from Lincoln High School in Jefferson City, Missouri. She will be lovingly remembered as "Mema" by her three daughters, Shannon Gess (John) of Lubbock, Texas, Deborah Rogers (William) of Columbia, Missouri and Rama Harvey of San Diego, California. Shirley has three wonderful grandchildren, Shana Gess, John Gess Jr. and Shaun Harvey; five great-grandchildren, Phillip, Jasmine, Nathan, Lily and Joseph and a host of nieces, nephews, cousins and friends. She has truly been the pillar of our family. Shirley's professional career aligned with her desire to "care for others". She held a position as a secretary at Lincoln University Placement Office, secretary to Senator Howard, intake officer at the Commission of Human Rights, clerk at the City of Fulton, and retired as a para-professional from the Fulton Public School. Shirley enjoyed singing, playing the piano, cooking, reading and caring for her family. She loved the Lord and His people. Shirley was a long-term member of St. James United Methodist Church, Fulton, Missouri; and later an active member of United Community Cathedral, Columbia, Missouri and First Christian Church, Fulton, Missouri. Shirley was preceded in death by her mother, father and Homer Richmond Jr.

The family of Shirley Harvey created this Life Tributes page to make it easy to share your memories.

Shirley Harvey, 82, of Fulton, slept into the arms of Jesus on...

Send flowers to the Harvey family.