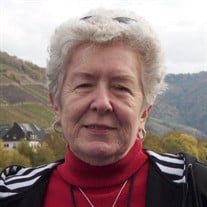 Sandra “Sandy” Shaffner, 78, of Boonville, Missouri, passed away unexpectedly on August 20, 2019 at her home. Sandy was born on June 25, 1941 to Hugh and Evelyn Boldman in Lawton, Oklahoma. She was the eldest of four siblings. After her father’s early death, Sandy helped her mother raise the family. After graduating from Rogers High School, Sandy embarked on a career that allowed her to help many people wherever she worked. In 1960, while working for Daisy Manufacturing Company in Rogers, Arkansas, she met and married Charley Shaffner Jr. They welcomed their only child, Charley III, in 1969 while living in Orlando, Florida. The family moved to Boonville in 1970, where Sandy was a secretary at Kemper Military School and then at the Boonslick Area Vocational-Technical School. She retired in 2001. Sandy enjoyed conversation, international travel, gardening, trying new recipes, reading, hunting for gifts, a wide range of crafts and hobbies, and spending time with her grandchildren. Her warmth and sense of humor were a blessing to all who knew her. Sandy felt immense gratitude for the support of her dear friends and the great kindness of her neighbors who always looked out for her. Sandy was predeceased by her parents, her brother Howard (“Bud”), and her husband. She is survived by her sister, Kay, and brother, Gene; her son, Charley; daughters-in-law, Becca and Laura; three grandchildren, Tori, Brenna, and Logan; and many friends and neighbors. She will be missed and fondly remembered by all who knew her.

The family of Sandra Faye Shaffner created this Life Tributes page to make it easy to share your memories.

Send flowers to the Shaffner family.