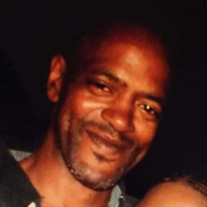 Roy Hawkins, 58, of Kansas City, MO, formerly of Sedalia, MO, passed away on Tuesday, January 18, 2022. A memorial service will be held on Saturday, January 29, 2022, at 1:00 pm at the Event Center in Sedalia. Born November 8, 1963, in Sedalia, Missouri. Roy attended school in Sedalia, MO. After graduating he entered the Air Force. He served in the Air Force from February 1982 to October 1994. After serving his country he worked for Coca Cola in Oklahoma until his health declined. He leaves to cherish his memory one daughter, Constance “Kacey” Unique Hawkins of Oklahoma City, Oklahoma. A brother Michael (Peggy) Hawkins of Sedalia, two sisters Vonda (Kenneth) Reese of Raytown, Mo., and Maxine (Gordon) Poindexter of Sedalia and a host of nieces, nephews, cousins, and friends. He is preceded in death by his mother, JoAnn Hawkins, three brothers, Rickey, Eugene, and Burt Hawkins, his grandparents, 2 aunts, and 4 uncles. Roy loved playing basketball, watching old movies, and listening to records. He was also a huge Prince fan. He loved spending time with family and friends, but nothing compared to the quality time he spent with his daughter.

The family of Roy Hawkins created this Life Tributes page to make it easy to share your memories.

Send flowers to the Hawkins family.