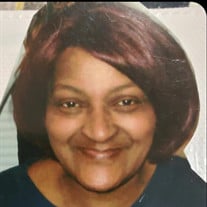 Rosetta Wilson 67, of Kansas City, Missouri, passed away February 21, 2022 at her home. She was born January 2, 1955 in Sedalia, Missouri. She was the daughter of Raymond Wilson and Barbara Wiltz. Rose graduated from Smith-Cotton high School. In 1979-1983 she was a Bartender in Junction City, Kansas. Thereafter she went back to Sedalia and worked with the state fair then traveled to Tulsa Oklahoma, where she worked in varies facilities in the housekeeping department. She returned to Kansas City, Missouri to be closer to her family. In her youth she was bicyclist she loved to ride her bikes, and playing softball in the park. In her young adult years, she loved to dance and went to every concert she could attend. Rose was a free spirit who enjoyed life and moved at the beat of her own drum. She was a member of Morning Star Baptist Church in Kansas City, Missouri Rose was preceded in death by her Parents Raymond Wilson and Barbara Wiltz, Son- Larry Wilson Sr. and Sisters- Pamela Dennis, Wanda Byrd She leaves to cherish her memory: One son- Brian Wilson of Kansas City, Mo., two Sisters – Charlotte Poindexter of Kansas City, Mo, Truedell Wilson of Grandview, Mo- five Grandchildren- Larry Wilson Jr, Brian Washington, Mareon Hill, Brian Wilson Jr, Jade Wilson, three Great Grandchildren- Lerry Washington, Dareon Hill, Maretta Hill and a Special Cousin- James Jackson and a host of Nieces, Nephews, cousins, and extended family. Rose will be greatly missed and will live on in the hearts of those who knew her.

Rosetta Wilson 67, of Kansas City, Missouri, passed away February 21, 2022 at her home. She was born January 2, 1955 in Sedalia, Missouri. She was the daughter of Raymond Wilson and Barbara Wiltz. Rose graduated from Smith-Cotton high School.... View Obituary & Service Information

The family of Rosetta Wilson created this Life Tributes page to make it easy to share your memories.

Send flowers to the Wilson family.