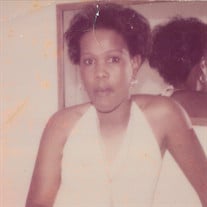 Rose M. Poindexter, 68, of Sedalia, slept into the arms of Jesus on Saturday, October 6, 2018, at University of Missouri Hospital in Columbia. Services will be held on Friday, October 12, 2018, at 12 PM at Ward Memorial Missionary Baptist Church. Visitation will be from 11 AM to 12 PM at the church. Rose Marie Poindexter, also known as Sister Rose, was born on February 6, 1950 to Leonard and Kathryn (Penn) Poindexter. Rose dedicated her life to God at an early age, and this value of faith was passed on to her children. Later in life she rededicated her life to work in God's Army and serve her Heavenly Father. Rose came from a close tight knit family. She was a mother figure to her younger siblings and best friend. She was a fun-loving person whose smile and personality would light up a room. Rose was a hard worker and was known to work two jobs to support her family. Her favorite jobs were Chesebrough Ponds (Unilever) in Jefferson City, MO, J.A. Lamy Mfg. and the Salvation Army Thrift Store (both locations) in Sedalia, MO. Rose rarely met a stranger and it was evident with the women she chose as her best friends. Her greatest joy was witnessing the births of many of her grandchildren, as well as the births of her great-grandchildren. Rose's favorite pass times were spending time with family at all gatherings. As well as telling stories to the younger generations. She also loved watching her favorite T.V. shows, Cops, the First 48, Law and Order, the ID Channel, and the News. Rose leaves to cherish her memory: her Uncle Lester Boggs, her siblings: William Poindexter, Morrece (Denise) Poindexter, Sherita Poindexter, Marsha Poindexter, Carmen (Charles) Taylor all of Sedalia, MO. Her children: Gordon (Maxine) Poindexter, Michael (Darlene) Poindexter, Alana Thornton, Charlessa (Freddie) Thomas, Mikki Poindexter. 16 grandchildren, 20 great-grandchildren, a host of nieces, nephews, cousins, and friends. A special longtime friend, Charles Thornton. Rose was proceeded in death by her parents, and brothers: Leonard Jr. (Tiny Baby) and Keven (Bo) Poindexter.

Rose M. Poindexter, 68, of Sedalia, slept into the arms of Jesus on Saturday, October 6, 2018, at University of Missouri Hospital in Columbia. Services will be held on Friday, October 12, 2018, at 12 PM at Ward Memorial Missionary Baptist Church.... View Obituary & Service Information

The family of Rose Poindexter created this Life Tributes page to make it easy to share your memories.

Rose M. Poindexter, 68, of Sedalia, slept into the arms of Jesus...

Send flowers to the Poindexter family.