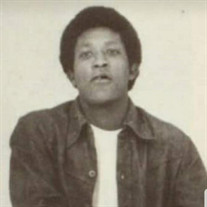 Rodney Nickens, 63, of Fulton, MO, passed away on Saturday, June 13, 2020 at Fulton Nursing and Rehab. Services will be held on Saturday, June 20, 2020 at 1:00 PM at Second Christian Church in Fulton. Visitation will be held from 11 AM to 1 PM at the church on Saturday. He was born February 12, 1957 in Kansas City, Missouri the son of the late Fred Nickens Jr. and Vera Mae Nickens, of Fulton, Missouri. Rodney attended Fulton Public Schools, and graduated from Fulton High School. Upon completion, he was employed by the Fulton State Hospital. Rodney was a member of Second Christian Church in Fulton. He was a cool, laid-back person with the most humble and genuine personality. Rodney had a smile & laugh that was contagious. His favorite pastime was music. He loved rapping to it, going on car rides listening to it, or simply playing it through his cd player. Rodney enjoyed spending time with family and friends. He had an avid love for family. Especially, his daughter, Ja’mia Williams, of Kansas City Missouri, his mother & best friend, Vera Mae Nickens, sisters, Fredetta Nickens & Vesta Mae (Perry) Lawson, and his baby brother, Flynn Nickens, all of Fulton, Missouri. Also, each one of his nieces, nephews, cousins, and friends. Rodney was proceeded in death by his grandparents, his father, Fred Nickens Jr, brothers Michael & Reginald Nickens, and nieces, Kandi Nickens & Fredtonya Nickens-Rodgers. Rodney now sits in heaven awaiting our arrival… Until We Meet Again…….See You Later

The family of Rodney Nickens created this Life Tributes page to make it easy to share your memories.

Rodney Nickens, 63, of Fulton, MO, passed away on Saturday, June...

Send flowers to the Nickens family.