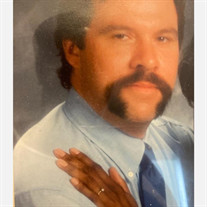 Robert K. Moyer 65, of Columbia, MO, passed away on Tuesday, August 17, 2021. Arrangements are pending. Robert Keith Moyer was born July 21,1956 in Illinois and was adopted by the Moyer family to make their family complete, who loved and cherished their beloved son. Robert Graduated from David H Hickman High school class of 1974 in Columbia MO. He later fell in love with a beautiful woman by the name of Theodora E Wright the two wed on September 26,1992. Robert Joins his parents and late wife Theodora in heaven, he leaves behind two daughters which he gained during his marriage, whom he loved as his own. Jennifer Wall (50) of Columbia, MO. And Susan Gordon (47) of Dallas, TX. Three Grandchildren: Trinekqua Betts (30) of Columbia, MO. Kenneth Edwards (28) of Columbia, MO. And Kennedy Gordon (18) of Dallas, TX. One Great Grandchild Naomi Brown (9) of Columbia, MO. Whom he loved, cherished, and was extremely proud of. Roberts Grandchildren and Great Grandchild were his everything! Robert Enjoyed Camping, scary movies, candy, watching late night tv (Conan, Jay leno), good cooking, drawing, collecting historical stamps, antiques, historical coins, crossword puzzles, a good beer, and most of all spending time with his family, especially his grandchildren and great grandchild. Robert was a kind, sweet, smart, and hard-working man who had smile that could light up a room, he was employed at Boone Hospital for over 20 years as the night chef a job he loved to do. Robert was still employed with Boone in his passing. Robert believed in hard work in which he installed in all his grandchildren as well as he led by example. Robert will truly be missed as he was adored by many especially his family.

Robert K. Moyer 65, of Columbia, MO, passed away on Tuesday, August 17, 2021. Arrangements are pending. Robert Keith Moyer was born July 21,1956 in Illinois and was adopted by the Moyer family to make their family complete, who loved and cherished... View Obituary & Service Information

The family of Robert K Moyer created this Life Tributes page to make it easy to share your memories.

Send flowers to the Moyer family.