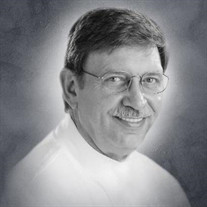 Robert Jenkins, 73 of Sedalia, Missouri, passed away on Saturday, June 22nd at University Hospital in Columbia, MO. A Memorial Visitation will be held from 5:30 pm-7:30 pm on Friday, June 28th at Alexander-May Funeral Home in Sedalia. Robert was born in Leavenworth, Kansas on March 23, 1946 and was adopted at birth by Hayward and Reva (Nelson) Jenkins. He graduated from Leavenworth High School in 1964. Robert was a veteran of the US Army and served for two years during the Vietnam War. He graduated from Kansas State University with a bachelor’s degree in Sociology and a master’s degree in Counseling. Robert was a Licensed Professional Counselor for over 40 years and held additional certification in substance abuse and addiction counseling. His professional career included working at the United States Penitentiary in Leavenworth and supporting families in his counseling practice for over 30 years in the Sedalia area. Robert married Judith on October 9, 1992 in Sedalia. Robert is preceded in death by his parents, Hayward and Reva (Nelson) Jenkins and his sister, Janette Alexander. Robert is survived by his wife, Judith Jenkins of Sedalia, children JoAnn Jenkins of Toledo, OH, Alan Jenkins of Sedalia, Aaron Jenkins of Hiawatha, Kansas, step-children Amber (Chris) Crane of Hallsville, Autumn (Douglas) Leach of Lake Winnebago and Aaron (Carrie) McMillan of Inverness, IL, sister Christine (Chuck) Corriston of Leavenworth, KS, grandchildren Trey Hicks, Tory Hicks, Tyson Hicks, Raegan Hicks, Harper Leach, Collin Leach, Madison McMillan, Sophia McMillan and many nieces and nephews. In lieu of flowers, the family suggests donations may be given to New Haven Residential (1902 South Ingram Avenue, Sedalia, MO 65301). The family of Robert wishes to extend our sincere thanks to the caring SICU staff at University Hospital and Naveen Pokala, MD for their compassion for Robert.

The family of Robert Jenkins created this Life Tributes page to make it easy to share your memories.

Robert Jenkins, 73 of Sedalia, Missouri, passed away on Saturday,...

Send flowers to the Jenkins family.