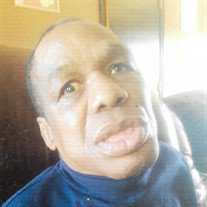 Robert Jackson 68, of Moberly, MO passed away on Sunday, October 31, 2021 at Valley View Nursing home in Moberly. Services will be held on Saturday, November 13, 2021 at 1:00 PM at Second Baptist Church in Salisbury, Missouri. Visitation will be held on Saturday from 12:00 PM to 1:00 PM at the church. The repast will be held following the burial at the Knights of Columbus Building located at 311 E. Patterson Ave, Salisbury, Missouri 65281. Robert was born October 7, 1953 in Dalton, Missouri to Chauncey and Lottie Jackson. Robert loved to go on car rides. He would always grab his jacket when family would visit and was always ready to go. When family visit they always brought snacks, which he enjoyed. He always loved attention. If you were talking to someone else he would start coughing to get your attention, which made us smile and laugh. He was mentally disabled and couldn't talk but he was loved by family and friends. Robert was preceded in death by his parents, Chauncey and Lottie Jackson, sisters: Wanda Jackson Aldridge, Emma Jackson, and brother Robert Jackson. He is survived by his brothers: Chauncey Jackson and wife Kaye Jackson of Marshall, Missouri, Ricky Jackson and Darren Jackson both of Aurora, Colorado, sisters: Peggy Lucas and Husband J.L. Lucas of Moberly, Missouri, Diane Hughes of San Antonio, Texas, as well as several nieces, nephews and cousins. Robert lived at Marshall Rehabilitation Center in Marshall, Missouri for the majority of his life. Then he moved to Dillahunt in Columbia, Missouri and from there he moved to Fidelis in Columbia, Missouri. His health caused him to move to Valley View Rehabilitation in Moberly, Missouri.

Robert Jackson 68, of Moberly, MO passed away on Sunday, October 31, 2021 at Valley View Nursing home in Moberly. Services will be held on Saturday, November 13, 2021 at 1:00 PM at Second Baptist Church in Salisbury, Missouri. Visitation will... View Obituary & Service Information

The family of Robert Jackson created this Life Tributes page to make it easy to share your memories.

Robert Jackson 68, of Moberly, MO passed away on Sunday, October...