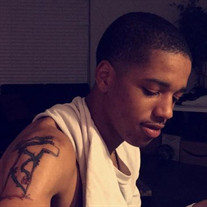 Richard Walter Ward III, 20, of Columbia, slept into the arms of Jesus on Sunday, October 8, 2017, at University of Missouri Hospital in Columbia. A memorial service will be held on Wednesday, October 11, 2017, at 7 PM at H.T. May & Son Funeral Home in Columbia. Richard Walter Ward III, was born October 28, 1996 the son of Richard Walter Ward Jr. and Alicia Larrieu Ward. Richard attended the Ancona School, St. Ignatius College Preparatory School and Phillips High School in Chicago, IL. Richard began his college journey at the University of Missouri (Mizzou) as a psychiatry major. Richard loved working with children and wanted to become a child psychiatrist. He was active in the Adventure Club Program, and he was a member of the True Rock Ministry in Chicago, IL. Richard enjoyed playing and coaching soccer; he also loved playing basketball. Richard had a gift to play and create music. He often spent hours making music and sharing his beats with friends of which he was always surrounded by. Richard was a hard working person, he dedicated and committed excellence to everything he decided to do. Over his lifetime Richard lived for life experiences and all that life had to offer. On October 8, 2017 God requested a face to face with his son. It is now well with his soul. He leaves to cherish his memory his parents Richard and Alicia Ward, one brother Christian Ward, all of Chicago, IL., his grandfather Preston Gilliam of Memphis, TN., three uncles Carl(Rhondalynn) Larrieu of Nashville, TN., Bryan (Carla) Larrieu of Lawrenceville, GA., and Clifford (Lisa) Larrieu of Puyallup, WA., one great uncle Walter R. Baker III, of Chicago, IL., four aunts Lauri M. Gilliam of Nashville, TN., Prestine Gilliam of Gallatin, TN., Julie Ward of Los Angeles, CA.and Alzatia Gilliam of Jackson, MS., and one great-aunt Beverly Matlock of Maywood, IL.

Richard Walter Ward III, 20, of Columbia, slept into the arms of Jesus on Sunday, October 8, 2017, at University of Missouri Hospital in Columbia. A memorial service will be held on Wednesday, October 11, 2017, at 7 PM at H.T. May & Son Funeral... View Obituary & Service Information

The family of Richard Walter Ward III created this Life Tributes page to make it easy to share your memories.

Richard Walter Ward III, 20, of Columbia, slept into the arms...

Send flowers to the Ward family.