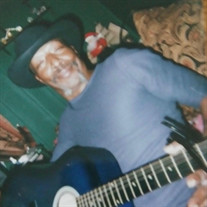 Richard Sims, 66, of Bunceton, MO, passed away on Thursday, June 25, 2020 at his home. Arrangements are pending. Richard Leon Sims 66, left his earthly life on Thursday, June 25, 2020 at 2:20 A.M. at his home in Bunceton, MO. Richard was born in New Lebanon, MO on August 21, 1953 to Eugene and Ada (Frazier) Sims. Richard attended Pilot Grove Schools. At an early age, he was baptized at Mt. Moriah AME church. Richard worked at Fuqua Homes for 12 years. He retired from the workforce in 2005. Richard was united in marriage to Judith Mustion on August 28, 1976. In this union, two children were born. On October 17, 2003, Richard was united in marriage to Diane Cole. In this union, he was blessed with more children and grandchildren. Richard is survived by his wife, Diane of the home, his daughters, Theresa Ann Sims of Minneapolis, MN. and Jackie Lynn Sims of St. Paul, MN. Two grandsons, C.J. Criner and Raphael L. Dow, III and one granddaughter, Imani N. Criner. Richard also leaves to cherish his memory four brothers, Alfred W. Sims of Kansas City, MO, Donald N. Sims, of Kansas City, MO, Kenneth N. (Nellie) Sims of Boonville, MO and Norbert D. (Kathy) Sims of Columbia, MO. He also leaves to treasure his memory a host of nieces, nephews, cousins and friends. Richard was preceded in death by his parents and his brother, Leonard N. Sims. Richard will fondly be remembered for his love of music. He enjoyed playing his harmonica and guitar. Everyone knew when Richard put on his cowboy hat, boots and bib overalls, he was ready to dance! He was truly the life of the party. He loved to listen to his music turned all the way up. Richard enjoyed watching the NASCAR races. The louder the cars, the better. He loved spending quality time with his family and friends. Richard enjoyed life to the fullest.

The family of Richard Sims created this Life Tributes page to make it easy to share your memories.

Richard Sims, 66, of Bunceton, MO, passed away on Thursday, June...

Send flowers to the Sims family.