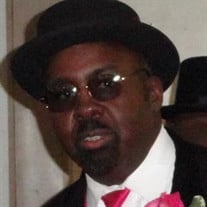 Richard King, 60, of Columbia, slept into the arms of Jesus, on Monday, January 22, 2018, at University of Missouri Hospital in Columbia. Memorial services will be held be held on Saturday, February 3, 2018, at 1:00 PM at the H.T. May and Son Funeral Home in Columbia. There will be no visitation. Obituary Richard Cornell King Sr. was born May, 10 1957 to John King Sr and Geraldine(Coats) King-Gordon in Columbia. In 1980 he met the love of his life Byrde King, They married in July 2, 1988. Together they raised a daughter, Nyetta, 37 and 3 sons, Richard Jr 35, Derrick 31, and Tre’ 23. Richard King Sr. enjoyed hunting, fishing, dancing, watching sports, and above all else spending time with family. After working for the University of Missouri for several years he came to realize that owning his own business was what he wanted. With these accomplishments, he obtained a Business License through the City of Columbia and began working for himself. Richard was a proud, confident and successful business owner. Owning Best Rates Yet & Cooling LLC since 2000 and then later, along side his wife, Byrde King, started BIG 6 Auto Sales LLC in 2005. Richard believed that ownership allowed him the freedom to make his own rules and yet keeping his customers in mind. He worked hard and long hours but also knew when to take a break to travel. Richard made people laugh. He spoke his mind and let you know what he thought and because of that he was well known, made great friends and business partners. On January 22, 2018, Richard made his call to heaven’s doors. There he’ll be greeted by his parents, John King Sr; Geraldine King-Gordon; and stepfather, Edward Gordon; His brothers, James “Babe” King and Robert “Bobby” King. Richard King Sr. leaves to cherish his memory his wife, Byrde King; his daughter, Nyetta Dienagha, of Columbia, MO; Three sons, Richard King Jr., of St. Petersburg, Florida, Derrick King, and Tre’ King both of Columbia, MO; Granddaughter, Audrey King; a sister, Marilyn King and Four brothers, John King, Elias King, Edward King and Anthony King all of Columbia, MO.

Richard King, 60, of Columbia, slept into the arms of Jesus, on Monday, January 22, 2018, at University of Missouri Hospital in Columbia. Memorial services will be held be held on Saturday, February 3, 2018, at 1:00 PM at the H.T. May and Son... View Obituary & Service Information

The family of Richard King created this Life Tributes page to make it easy to share your memories.

Send flowers to the King family.