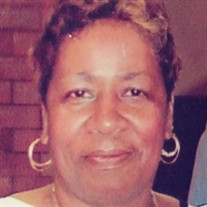 Rhodella Malone, 74, of Kansas City, MO, formerly of Boonville, MO, passed away on Monday, March 29, 2021 at Centerpoint Hospital in Independence, MO. Funeral services will be held on Tuesday, April 6, 2021 at St. Matthew AME Church at 11:00 AM. There will be no visitation. Rhodella Mae Malone 74, of Kansas City, Mo. passed into eternity on Monday March 29, 2021, in Independence Mo. She was born on Nov. 7, 1946 in Columbia, Mo. to Esther M. Ellis Perry and Robert G. Malone. Rhodella spent most of her younger years in Boonville, Mo. where she graduated from Sumner High School. She worked at Kemper Military School and Toastmaster. She later moved to Kansas City, Mo. where she began working for General Motors and attended and graduated from Cosmetology school. After more than 25 years at GM she retired. She held several caregiving roles before and after her retirement. She became a member of St. Matthew Chapel AME Church at an early age. Although she lived in KC, she still supported the church, the Boonville community and its citizens in many ways. She assisted in the care of her mother until her recent illness. She leaves to cherish her memory her loving mother Esther Mae Perry, one daughter Delgina Shaun Malone, one grandson Michael (Monster) L. Malone, 3 great-grandchildren all of Mesa Az., and 1 great-grandchild of Boonville, Mo., two sisters Charlotte Perry (KCMO) and Matonia Perry (Boonville), one brother Michael R. (Evelyn) of Germany and a host of nieces, nephews, cousins and friends. Rhodella also had a host of relatives in Louisiana state. She was preceded in death by her fathers Robert Malone and Charles Perry, brothers Mitchell and Charles Perry, and sister Viola Marie Perry. There was nothing Rhodella wouldn’t do for anyone. She really enjoyed trips to Las Vegas with family and friends. That carrot cake and cream cheese walnut icing and those oatmeal raisin walnut pecan cookies were the bomb and will be missed by those luck enough to get some!

The family of Rhodella Malone created this Life Tributes page to make it easy to share your memories.

Send flowers to the Malone family.