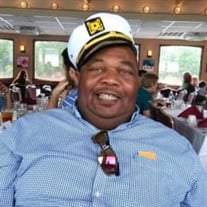 Ray L. Freeman, 69, of Jacksonville, FL, formerly of Boonville, MO, passed away on Friday, July 9, 2021 at the E.T. York Care center in Gainesville, FL. Funeral services will be held on Saturday, July 31, 2021 at 11:00 AM at the H.T. May and Sons Funeral Home in Boonville. Visitation will from 9:30-11AM Saturday at the funeral home. . Services will be live-streamed through Facebook on Saturday, July 31, 2021, at 11:00 AM at https://www.facebook.com/htmayfuneralhome. Our beloved Ray Lea Freeman, who lived a life rooted in the virtues of strength, faith, transformation, and loving-kindness, was born to Margaret Freeman on October 16th, 1951 in Blackwater Missouri. The family soon after moved to Boonville, MO, where he was raised by his mother Margaret and father Sylvester Burnham. Ray Lea grew up in a close-knit neighborhood on Water Street in Boonville - a deeply familial community that truly embodied the essence of the ancient African proverb, “It takes a whole village to raise a child”. Ray Lea, with his infectious smile and brotherly demeanor, developed friendly ties with each family in the neighborhood. He was outgoing, friendly, funny and caring. Even as a child he would help anyone in need, and his reputation of “never knowing a stranger” preceded him throughout the years. As a teenager Ray Lea was no stranger to hard work (and hard play!); he spent many a summer enthusiastically hauling hay to save money and having a great time getting into good trouble with friends and family. During these years he also became highly adept at athletics. He participated competitively in track and football, but was particularly fascinated with bodybuilding and fitness. As Ray’s athletic career blossomed, he started to compete in weight lifting, which earned him the nickname of The Black Incredible Hulk. His strength and athletic ability led to many accolades, including his placement on the Football team at Kemper Military School and College. After graduation, Ray worked for the Reform School for Boys, in both Boonville and Kansas City, Missouri, spent several years employed at the Boonville Correctional Center, as well as at Joe Machen's Ford as a car salesman. Until Ray’s retirement he worked as a Corporate Trainer for the Cracker Barrel franchise and created many wonderful memories with family, friends, and colleagues during his time there. Ray Lea had a love of classic cars: one in particular was an Oldsmobile Cutlass, yellow and black - the original bumble bee! This car is still in New Franklin today and is a testament to his unique taste and persona. It’s a special reminder that Ray’s presence left an impactful and lasting impression on everyone who knew him. In 1998 Ray married his wife Juliette. They spent their time traveling and enjoying foods of all kinds, especially Barbecue. Ray was a connoisseur of Midwest Barbecue and shared his Barbecue talents with all, and was always first in line when the grill was hot. Ray Lea was truly a man of God. 2 Timothy 2:15 says study to shew thyself approved unto God . Ray Lea devoted the first two hours of every morning to the Lord our God, by hearing, reading, studying and by sharing His word to many. He leaves to cherish his memory his loving wife, Juliette Freeman of the home; one son Ben Connole (Candice), Pearl River, LA., seven daughters, Lena Freeman of Largo, FL, Jeannette Logsdon of Gonzales, LA. Bernadette Woods (Ryan) of Madisonville, LA., Colette Cruise(Jason) of Bonaire, GA. Stephanie Gardner (Treal) of Boonville, MO., Mary Watkins of Spring Lake NC, and Sasha Coleman of Kansas City, KS; one Brother Ron Freeman of Lee’s Summit, MO.; five sisters, Erma Bruce of Grandview, MO., Willa Jones of Kansas City, MO., Nellie Sims and Elaine Miles both of Boonville, MO. and Cynthia Grant (Greg) of Columbia, MO; One Aunt, Emma Freeman of Boonville, MO., thirteen grandchildren and a host of nieces, nephews, cousins and friends. He will be dearly missed and held deeply in the hearts of those who carry his legacy and memory.

The family of Ray Lea Freeman created this Life Tributes page to make it easy to share your memories.

Send flowers to the Freeman family.