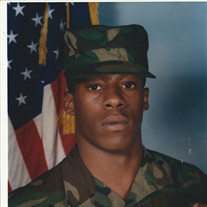 Phillip Alan Dawson, 52, of Columbia, slept into the arms of Jesus on Tuesday, May 16, 2017, at his home. Memorial services will be held on Saturday, June 3, 2017 at H.T. May and Son Funeral Home in Columbia at 11:00 AM. Phillip (Papa) Alan Dawson, son, brother, nephew, uncle, father, grandfather, cousin and friend, was born on June 27, 1964, to Phillip Leon Robinson and Joyce Beatrice Dawson, in Columbia, Missouri. Phillip entered eternal rest on May 16, 2017. He was 52. Phillip graduated from Hickman High School in 1982. He served in the United States Army as a driver for five years and was honorably discharged in 1993. Phillip had many accomplishments, including an Army achievement medal, which he was awarded for his meritorious service while stationed in Kaiserslautern, Germany. The award reads that Phillip did an “outstanding job while working with the battalion personnel, German civilians and battalion M1915 drivers. He efficiently and effectively cleared all cargo from the Kaiserslautern Army depot and made all daily spots. Specialist Dawson’s outstanding performance of duty reflects great credit on him, the unit, and the United States Army.” He also received an Army service ribbon, a driver and mechanic badge, an Army good conduct medal 1st award, an overseas service ribbon, an expert badge (rifle and grenade), and an Army lapel button. Phillip played football for the Mighty Mites little league football team as a child and was a drummer in the marching band at Hickman High School. He also loved to fish. He was affectionately nicknamed “Papa” by his mother when he was about 2 years old because he was “such an energetic little boy.” His father, who preceded him in death, thought it was funny when he would challenge Phillip to pick up a footstool that they had in the home. And loving the challenge and eager to please, Phillip would pick up the stool, thus demonstrating his strength and that he was, indeed, “the man.” Phillip had a beautiful smile and a generous heart, and he was always willing to give a person whatever he had. He was employed at the Veterans Hospital as a custodian. Phillip loved the Lord and gave his heart to Him as a young man. He attended Mount Celestial Baptist Church as a child, and frequented Urban Empowerment Ministries as an adult. Phillip was preceded in death by his father, grandparents and one aunt. Gone from this life but not forgotten, Phillip leaves to cherish his memory, his mother, Beatrice Dawson of Columbia; grandfather, Charles Patrick of Kansas City, Missouri; his sons, Phillip Alan Dawson II of Overland Park, Kansas, and Jeremy Antoine Dawson of Springfield, Missouri; four sisters, Donna (Craig) Fenner of Florissant, Missouri, Jennifer Dawson, Annette Peal and Beatrice Jackson, all of Columbia; four grandchildren, Dominique Dawson, Tori Richards, Erin Dawson and Adrian Dawson, all of Overland Park, Kansas; six aunts, Linda Dawson of Columbia, Sylvia (Lee) Williams of Romulus, Michigan, Barbara Smith, Crystal Gregory and Ann Bowers, all of Kansas City, Missouri, Tonette Lawson of Columbia; six uncles, Gregory Dawson of Hannibal, Missouri, Wilford Cross, Darrell Cross, Robert Dawson and Nathaniel Gregory, all of Columbia, and Tyrone Robinson of Great Falls, Montana, and a host of nieces, nephews, cousins, loved ones and friends. Contributions towards the funeral can be made at https://fundthefuneral.com/phillip-dawson.

The family of Phillip Dawson created this Life Tributes page to make it easy to share your memories.

Phillip Alan Dawson, 52, of Columbia, slept into the arms of...

Send flowers to the Dawson family.