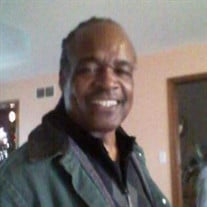 Perry Curtis, 67, of Columbia, MO. passed away on Monday, November 6, 2017 at Boone Hospital Center. Funeral services will be held on Wednesday, November 15, 2017 at St. Luke United Methodist Church in Columbia at 12:30 PM. Visitation will be from 10:30-12:30PM at the church. Perry Curtis was born on July 3, 1950 in Columbia, MO., the second oldest child of Fannie Mae and Provine Curtis. He spent many of his childhood days being mischievous on Cemetery Hill, where he developed his skill for creating his own personal success and developing many lifelong friends. Perry was most known for his captivating ,larger than life smile that welcomed anyone who crossed his path, his fearless heart that led him to face life's challenges head-on, his contagious sense of humor that brightened everyone's day, but most importantly Perry will always be remembered for his unwavering generosity and his ability to mentor people from all walks of life. Perry selflessly gave more of himself than he ever had to give. Perry leaves to cherish his memory his beloved children Perry Clark Jr.of DesMoines, IA., Tony Curtis Mohammed of Atlanta, GA., Shannon Gregory of Kansas City, MO., Regina Muhammed of Chicago, IL, Mercedes Johnson of Killeen, Tx., Kandas Holmes of Columbia, MO., Kiara "Kiki" Gregory of Kansas City, MO., Tiffany Meachum of Columbia, MO., his sisters Shirley Curtis, Patricia Brown of Columbia, MO., Debbie Webber of Jefferson City, MO., Jennetta Curtis of Austin, TX., Clara Curtis-Ganaway of Memphis, TN., his brothers Michael Curtis, Anthony Curtis, Lamont Cooper all of Columbia, MO., his extended family Linda Doris Hicks and Cecelia Hicks aka Aunt Pook and family. A host of grandchildren and great-grandchildren, nieces, nephews and close friends. He was preceded in death by his mother Fannie Mae Curtis, his father Provine Curtis, his brother Jerry Curtis and his nephew Arnel Monroe.

Perry Curtis, 67, of Columbia, MO. passed away on Monday, November 6, 2017 at Boone Hospital Center. Funeral services will be held on Wednesday, November 15, 2017 at St. Luke United Methodist Church in Columbia at 12:30 PM. Visitation will be... View Obituary & Service Information

The family of Perry Curtis created this Life Tributes page to make it easy to share your memories.

Perry Curtis, 67, of Columbia, MO. passed away on Monday, November...

Send flowers to the Curtis family.