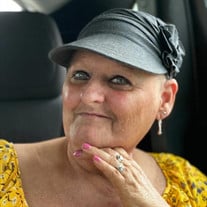 Penny Kennedy Burks 60 of Higbee Mo. passed away on Aug. 28th, 2021 after a long battle with cancer. Penny was born on Dec. 24th, 1960 to Billy Joe Kennedy Sr. and Anna Lee Williams in Boone County. Penny married Richard (Ricky) Burks and he proceeds her in death along with her Dad (Bill Kennedy), step-dad (Tony Williams). She is survived by her mother, Ann Williams (Randy), Daughter Kim Lebsock (Reb), 2 grand daughters Taylor Lebsock (Matt), Kortney Roth (Joey), 2 great grand children Addison Greening and Hunter Roth. 1 Brother Billy Joe Kennedy Jr. (Kathy), and 1 sister Rita Kennedy Lewis (Gary). She also leaves behind several nieces, nephews, Great and Great Great Nieces and Nephews, cousins, aunts, uncles, family and loving friends. She loved each and everyone she met with all of her heart. A small family graveside services will be held at Church of Christ in (Hallsville, Mo) on Thursday Sept. 2nd, 2021 at 10 am. In lieu of flowers a funeral fund has been set up for those who would like to make a contribution to help the family out with Penny's Wishes. Donations can be made to Venmo @kaseymills2989 or mail to Gary Lewis P.O. Box 247 Sturgeon, Mo. 65284 Footprints In The Sand one night a man had a dream. he dreamed he was walking along the beach with the Lord. Across the sky flashed scenes from his life. For each scene, he noticed two sets of footprints in the sand; one belonging to him, and the other to the Lord. When the last scene of his life flashed before him, he looked back at the footprints in the sand. He noticed that many times along the path of his life there was only one set of footprints. He also noticed that it happened at the very lowest and saddest times in his life. This really bothered him and he questioned the Lord about it. "Lord, you said that once I decided to follow you, you'd walk with me all the way. But I have noticed that during the most troublesome times in my life, there is only one set of footprints. I don't understand why when I needed you most you would leave me." The Lord replied, "My precious, precious child, I love you and I would never leave you. During your times of trial and suffering, when you see only one set of footprints... it was then that I carried you." Jesus

The family of Penny Kennedy Burks created this Life Tributes page to make it easy to share your memories.

Send flowers to the Burks family.