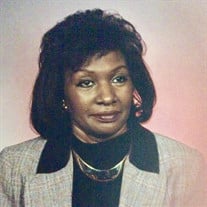 Patricia Davis,77, of Raytown,MO., formerly of Marshall,MO., passed away on Sunday, January 13,2019 at Westridge Gardens in Raytown, Mo. Funeral services will be held on Saturday, January 26, 2019 at Mt. Olive Baptist church at 11:00AM. Visitation will be from 10-11AM Saturday at the church. Patricia Jo Richardson was born on July 22, 1941 in Marshall, Missouri to Raymond and Anna Josephine Richardson. After their dissolution of marriage Anna later married Joe Lawrence. Patricia was affectionately known as “Pat” or “Patty Jo”. She attended elementary and high school in Marshall. Pat later married Henry Lee Davis. To this union one son Henry Lee Davis, Jr. was born. The family later moved to Kansas City. Pat decided to enroll in cosmetology school. After receiving her cosmetology license she worked at Mrs. Lock’s Beauty Salon. Mrs. Lock was like a mother to her and treated her like a daughter. Pat’s high-end clientele included an attorney who was the first African American woman to practice law in Kansas City. Pat was the only beautician that she would let style her hair. Pat would do her hair every day before she went to her office or court. After returning to Marshall, Pat became actively involved at Mt. Olive Baptist Church, where her Christian experience began at an early age. She was head of the Usher Board and worked in the kitchen overseeing food preparation for church events. She faithfully attended bible study. Pat was instrumental in organizing a youth group with the focus becoming good citizens. Bible study was required. Hand sewing, personal hygiene, etiquette and manners were taught. Pat invested a great deal of time and effort in young people. Pat was employed at the Marshall Habilitation Center. She worked there for 20+ years. She worked as an Activity Director and Cosmetologist. The 1970’s “Bowl Cut” was the style that the residents received. Pat changed that. She gave everyone a unique haircut and style. She wanted ladies to look good. She made every effort to individualize a hairstyle tailored to her customers. Pat enjoyed teaching about haircare and maintenance. She attended hair shows which afforded the opportunity to network, learn new techniques and discover new products. She always worked two jobs. Pat did hair after work with another beautician, Joanne Eubanks, and also worked at Carson Jacques Barber Shop. During this time her health started to decline. After Pat became ill she went to Kansas City for medical treatment but maintained her home in Marshall. On Sunday, January 13, 2019 she went home to be with the Lord. Pat was the epitome of elegance, style and grace. She will be sorely missed. Pat was preceded in death by her parents, Raymond and Anna Josephine Richardson; stepfather, Joe Lawrence, and grandparents Will and Ida Walker. Pat will be fondly remembered by her son Henry and wife Debbie, grandchildren; LaTasha, LaShonda, Ashley, Joshua, and Johnathan, great-grandchildren; Elijah, Amiyah, Amelia, Hannah and Ava; along with a host of extended family and dear friends.

Patricia Davis,77, of Raytown,MO., formerly of Marshall,MO., passed away on Sunday, January 13,2019 at Westridge Gardens in Raytown, Mo. Funeral services will be held on Saturday, January 26, 2019 at Mt. Olive Baptist church at 11:00AM. Visitation... View Obituary & Service Information

The family of Patricia Davis created this Life Tributes page to make it easy to share your memories.

Send flowers to the Davis family.