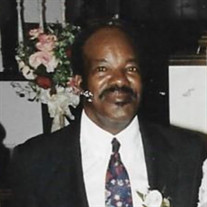 Obie Lloyd Brown, Jr., 77, departed from this life on Tuesday, August 18, 2020. Memorial services will be held on Saturday, August 29, 2020 at St. Luke United Methodist Church at 1:00 PM. He was born October 12, 1942 in Callaway County to the late Obie Lloyd Brown, Sr. and Dorothy (Lewis) Brown. He was educated in the Callaway County School District. He was employed by several restaurants before his employment at Columbia Regional Hospital, where he later retired from. He married Mary J. (Coleman) Brown on February 17, 1976 who resides in Columbia, Mo. He leaves to cherish his memory: one daughter; Carla Bradley of Columbia, Mo., who blessed him with 7 grandchildren and seventeen great grandchildren, two stepsons; Carlos Buckner, James (Jimmy) Coleman (Diane), three stepdaughters; Crystal Bradley, Winona Coleman¬Broadus (James), and Janie Coleman, all of Columbia, one nephew; Michael Brown of Columbia, Cindy Brown of North Dakota along with her three children. He also leaves a host of cousins and friends to cherish his memories. He was preceded in death by both of his parents, one brother; two grandsons; Brandon Coleman and ShaVar Buckner. Obie had a love for outdoor sports (hunting, fishing, and dog racing). He was also the family mechanic.

The family of Obie Lloyd Brown created this Life Tributes page to make it easy to share your memories.