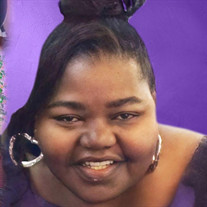 Norma "Big Mama" Butner, 61 of Salisbury, Mo departed and received her wings on Thursday December 16,2021 in Columbia, Missouri. Memorial services will be held on Wednesday, December 29, 2021 at 2:00 PM at H.T. May and Son Funeral Home in Boonville, Missouri. There will be no visitation. Norma Diane Butner was born June 30th, 1959, to Opal & Walter Butner. Big Mama AKA Sista No-No was a God-fearing woman who loved spending time with family & loved ones and attending church. She was a member of the Faith Walk Ministries choir, which is located in Paris, Mo. as well as very active in the church scene; she was a co-founder/co-creator of the Praise Team youth worship group. She loved to sing praise & gospel songs, coordinating dancing and writing plays; which she did until she became ill…even when her health failed her; her faith & spirits never altered or withered. She did not get the name aunt/sista No-No for no reason she was definitely a force to be reckoned with never scared to express herself &/or tell you about yourself rather you like it or not she used to love telling people “No" (especially her son Derrick). Although she could seem tough and rough on the outside once you got to know her, she was as sweet as could be. she would do anything to help the ones that she loved. she will be missed dearly! Now that she has departed & received her crown and wings; she has a host of family & loved ones to guard over & look out for; her son Derrick Young of Columbia, Missouri. Several other nieces and nephews as well as other family members and youth that she was also a mother figure to: LaShaun Butner of Columbia, Mo; Aundrae Butner of Marshall, Mo; Ebony Butner of Memphis, Tn and Marsha Butner of Columbia, Mo... this list could literally go on for pages. Big Mama Had a heart for her family and loved ones that only God can measure and reward. Norma Butner also leaves behind to cherish her memory her brothers: Ronald "Ronnie" Brown of Marshall, Mo, Kevin Hayes of Marshall, Mo, Lyle "Butch" Butner of Kansas City Mo, Wendal "Wendy"' Butner of Moberly Mo, Howard "Nubbs" Butner of Marshall, Mo., Walter "Nick" Butner of Boonville, Mo., and Kenneth "Kent" Butner of Columbia, Mo. Her sisters Noveta Shepherd of Louisiana, Mo., and Rhonda Hayes of Marshall, Mo, and Big sister Julia "Judy" Warren of Columbia, Mo. who stayed with her through the good and bad times, she stayed by her side all the way up until her last days. Norma was also a sister to Ronnie Dean Hayes of Marshall Mo., and Rita Hayes Fisher of North Kansas City, Mo. Big Mama Had 5 Grandchildren, several nieces and nephews plenty of other family members and friends from the church community will miss her dearly. Norma was preceded in departure by her parents, two of her brothers; Fredrick "Tojo" Brown and John Ervin "JE" Brown; and her baby sister Raneice "Rae/Butterfly" Young. The family would like to extend their gratitude and appreciation for all of those who could attend the memorial service as well as those who were not able to. "We lost a warrior, but we gained an Angel"

Norma "Big Mama" Butner, 61 of Salisbury, Mo departed and received her wings on Thursday December 16,2021 in Columbia, Missouri. Memorial services will be held on Wednesday, December 29, 2021 at 2:00 PM at H.T. May and Son Funeral Home in Boonville,... View Obituary & Service Information

The family of Norma Butner created this Life Tributes page to make it easy to share your memories.

Send flowers to the Butner family.