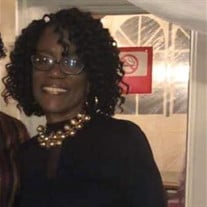 Murdies Glenn Gordon was born in Coldwater, MS to Isaiah and Vestoria King, the third of 12 children born to the couple. During her youth, Murdies played an integral part in assisting her parents with nurturing and caring for her younger siblings. She was also inquisitive, yet obedient with a calm and peaceable demeanor, one that would be the hallmark for the duration of her life. Murdies graduated from Tate County High School in 1968 where she played the trumpet for the school band. She continued her education at Northwest Community College. Murdies accepted Jesus as her Lord and Savior at an early age and served faithfully at Second Baptist Church in Coldwater until relocating to Chicago in 1970. While in Chicago, Murdies married the love of her life, James Gordon, Sr. Murdies exemplified a Proverbs 31 woman. She was a loving, supportive, and realiable wife to James Sr. She partnered with her husband and looked out for his best interest. The couple welcomed four children, Karonda, Deborah, James, Jr., and Alisa. Murdies loved her blended family and grandchildren dearly. It showed in her fervent prayers for her children and raising them to know and obey God. She diligently trained them in the way they should go, so when they grew older they did not depart from it. Murdies was employed with Nabisco Bakery for over 23 years while in Chicago. Her relationships and the familial bonds established there remained steadfest throughtout her life. In 1993, Murdies and family relocated to Coldwater, Mississippi. She enjoyed Sunday dinners at Madea’s, spending time, fellowshipping, and traveling with family and friends. She was indeed the rock of the family. Murdies was also a faithful member of Rising Sun Missionary Baptist Church. Her most heartfelt calling was being a servant leader to her children and grandchildren. In 2005, she moved to Columbia, MO to do what she did best—help take care of her family. Murdies supported her children through two deployments, as a caregiver for her son in law, and spiritual leader for the entire family. Murdies was employed with Walmart Supercenter for over 25 years. She enjoyed her worklife, her positive spirit was infeactious, and those that worked alongside her loved Ms. Murdies. Everyday Murdies went to work, she used her platform to tell someone how good God is. It was her faith in God that allowed her to face an illness that was unto death with the conviction that Jesus was the author, creator, and finisher of her faith. Amidst what could have been a grim situation, Mother Murdies activated her faith even while in the hospital, taking time to evangelize to the staff and remind her siblings that God is sovereign. Moreover, as the book of Thessalonians instructs, Murdies prayed without ceasing. She prayed for any and everyone in need, regardless of her affiliation with them or lack thereof. Often after sitting quietly for a moment, she could be heard saying, “Ohhh, thank you, Father God.” Murdies’ reverence for God determined her actions, thoughts, words, and priorities. She knew indeed that God was the supplier of all her needs which allowed her to seek after Him daily and diligently and to serve Him relentlessly. Murdies was a faithful member of Step of Faith Ministries. She served the body of Christ is numerous capacities: Sunday school teacher, Mother of the Church, and Pastor’s Aide. Her call to carry out the will of God was not confined to the interior walls of the church building. Murdies fulfilled the great commission of going out into all the world, preaching and teaching the Gospel by visiting, caring for, and ministering to the sick and shut-in. If you ever stood in her line at Walmart long enough, she was sure to tell you about Jesus. One of her greatest natural gifts was cooking, and she utilized it to be of use to the Kingdom of God. There were even times when she stood in the streets of the South Side of Chicago, rebuking the evil of drugs from the neighborhood, boldly, and courageously. Nevertheless, the single most important attributes of Murdies Glenn Gordon were her ability to embody Phillipians 2:7. As Christ, she took on the form of a servant and her personification of love. Embodying the definition of servant leadership, she consistently put her wants, needs, and desires below those of others. Making sure her family was taken care of, the members of the Church were attended to, friends had their needs met, and even those who might be strangers were fed. Murdies lived loved. She exuded what it meant to love God. Because of this, her legacy will forever live. Murdies Glenn Gordon laid down the troubles of this wicked and sinful world and went from labor to rest as she was rewarded for being faithful until the very end and given her Crown of Life as promised to her in Revelation 2:10 on the morning of Friday, April 3, 2020. However, be not dismayed as her legacy endures even earthly death, due to the life she lived. She was preceded in death by her husband, James Gordon, Sr; parents, Isaiah and Vestoria King; her brother, Charles McArthur; her stepson, Jeoffrey L. Gordon; and son-in-law, Derek T. Smith I. She leaves to cherish and celebrate her amazing life her children: Karonda King, Deborah Smith, James Gordon, Jr. (Ashley), and Alisa Gordon; her stepsons, Jason Gordon and Jamie Stewart; her grandchildren: Garlanda, Shadell, Armone, Asia, Derek, and Jade; her ten siblings: Sherry, Lora, Zelma, Winson, Wayne, Unitha, Kirial, Bell, Gunnis, Jannis and host of aunts, uncles, nieces, nephews, cousins, church members, friends, and community members. She ran her race. She fought her fight—well done, good and faithful servant. Rest in Love Momma!

Murdies Glenn Gordon was born in Coldwater, MS to Isaiah and Vestoria King, the third of 12 children born to the couple. During her youth, Murdies played an integral part in assisting her parents with nurturing and caring for her younger siblings.... View Obituary & Service Information

The family of Murdies Gordon created this Life Tributes page to make it easy to share your memories.

Murdies Glenn Gordon was born in Coldwater, MS to Isaiah and...

Send flowers to the Gordon family.