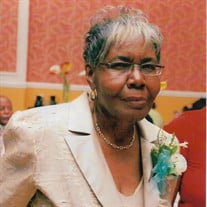 Mary King, 76, of Fayette, Missouri, entered into the arms of Jesus on Saturday, January 7, 2017, at Boone Hospital Center. Funeral services will be held on Saturday, January 14, 2017, at 1 PM at Linn Memorial United Methodist Church in Fayette. The visitation will be held from 11 AM to 1 PM at the church. Mary Frances King, 76, of Fayette, Missouri, passed away surrounded by loved ones at Boone Hospital Center on Saturday, January 7, 2017 from complications due to cancer. Mary F. King was born on June 10, 1940 in Howard County. She was the daughter Mable Boone and Leon Boone. Mary was the oldest of seven children. In her early years, Mary attended Lincoln Public Schools. Mary then left Lincoln Public Schools after attending for several years to go into the workforce. She worked several jobs before landing her lifelong job as a private housekeeper. Mary worked and raised the children of the prestigious families that she worked for. She found solace in her work and enjoyed it very much. In August of 1979, Mary F. King married Archie King. With him, Mary raised four children: Darrell Boone, Carlis (Boone) Jackman, Dion Boone, and Monica King-Hurd. Mary and Archie’s marriage was full of happiness and joy. Mary was very outspoken, straightforward, and always let her feelings be known. She enjoyed watching daytime television, with some of her favorites being Wheel of Fortune, Young and the Restless, and the Price Is Right. She found gratitude and comfort in watching her grandchildren grow up around her. Mary is preceded in death by her parents, Mable and Leon Boone, her husband, Archie King, her sisters, Virginia Crutchfield and Delphenia Williams, her brother, Issaiah T. Dickerson, her brother-in-laws, Melvin Burnes and Wesley Henry. She leaves to cherish her memory: her loving children Darrell Boone-Columbia, MO, Carlis (Don) Jackman-Fayette, MO, Dion Boone-Columbia, MO, and Monica (Andy) King-Hurd- Fayette, MO. Her sisters Ethel (Ira) Ewing-Moberly, MO, Janie Henry-KC, MO, and Stella Louise Burnes-Fayette, MO. Her brothers George Dickerson-Fayette, MO, and Garry (Trina) Boone-Columbia, MO, brother-in-law, Jessie Williams and sister-in-law Flora Dickerson, both of Springfield, IL. She also leaves a special Aunt, Louis Williams and a special Uncle, Earl (Lightning) Williams, both of Fayette, MO. She leaves 11 grandchildren and 8 great-grandchildren, and a host of nieces, nephews, family, and friends.

The family of Mary King created this Life Tributes page to make it easy to share your memories.

Mary King, 76, of Fayette, Missouri, entered into the arms of...

Send flowers to the King family.