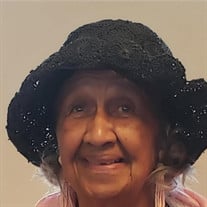 Mary Agnes Brown, 93, of Huntsville, AL, formerly of Boonville, MO, passed on on Sunday, July 25, 2021 at her home. Funeral services will be held on Friday, August 6, 2021 at the Lawrence A Jones Funeral Home in Kansas City, MO at 11:00 AM, visitation will be from 10-11AM Friday at the funeral home. Services will be live-streamed through Facebook on Friday, August 6, 2021, at 11:00 AM at https://www.facebook.com/htmayfuneralhome. Mary Agnes Brown was born, in Bunceton, Missouri on March 17, 1928, to the union of Ruth Taft Bell and Brancer Wayne Bell which proceeded her in death. Mary Agnes Brown was called home July 25, 2021. Before the death of her parents the family moved to Kansas City, Missouri. Mary Agnes accepted and professed Christ at an early age and became a member of Gregg Tabernacle A.M.E. Church in Kansas City, Missouri, where she served as a Sunday School Teacher, YPD, and on the Steward Board, Usher Board, Treasurer on the Finance Committee, Vacation Bible School and a short time in the Choir. Mary Agnes worked and retired from the Department of Treasury at the Internal Revenue Service after 30 years of Service in 1986. Mary Agnes lived and loved Christ and the Church. She loved to serve others. She took care of two of her great aunts, her Mother until her passing and her Mother-in-law until she was unable. Mary Agnes served and was involved in various community organizations such as Women's Missionary Society, Church women United Conference Branch, International Training in Communication, Payne Theological Seminary, Ecumenical Relations, Historiographer Statistician, Co-Chairperson Area 1 Fifth District Economic Development, Swope Parkway Health Care Coordinator, Senior Center Volunteer, Truman Medical Center Volunteer, and President of Harvest House Homeless Shelter. After the death of her husband, Luther Benjamin Brown of 44 years, Mary Agnes moved to Boonville, Missouri in 1992 and became a member of St. Matthew's A.M.E. Church and served on the Finance Committee, Sunday School Teacher, YPD and Mother Board, and was installed as an Ordained Deaconess at the Annual Installation- Northwest Missouri Conference in 2006. From 2001-2015 Mary Agnes lived with her Daughter Sandra Lynn Butler in Boonville, Missouri. In 2015 Mary Agnes moved to Harvest, Alabama to live with her adopted family Payton and Dana Sims , Payton III, and Paul until her health failed. Mary Agnes became a member of New Jerusalem Baptist Church, serving on the Mother Board, and Senior Women's Missionary Board. She was preceded in death by her husband Luther “Butch” Brown, and her mother and father, one brother Alfred Wayne Bell “AW”. Mary Agnes Leaves to Cherish one daughter, Sandra Lynn Butler, one granddaughter Charita Monique Carthen(Raynard Sr.), Two great grandsons Raynard Jr. and Ryan. Payton and Dana Sims who she loved as her children and Payton III-Trey, and Paul her grandsons. God Daughter Lora Hayes, Sister-in-law Minnizell Brown. Her favorite cousin Dollie Veal, and a host of other relatives and friends.

The family of Mary Agnes Brown created this Life Tributes page to make it easy to share your memories.