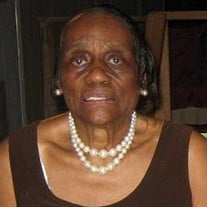 Marjorie Rose Beverly, 85, of Chandler, AZ., formerly of Columbia, MO. passed into eternity on Tuesday, January 24, 2017, in Scottsdale, AZ. Funeral services will be held on Saturday, February 4, 2017, at St. Luke United Methodist Church in Columbia. The visitation will be held from 10-11 AM at the church. “Man, could she cook!” Talk to anyone who knew Marjorie Rose Hayes-Beverly over the course or her life time in Columbia, Missouri and these are the first memories that will likely be shared. Marjorie was born, the second child among seven daughters and four brothers to Edward Hadley Hayes and Dora Lee Harvey-Hayes in Columbia Missouri on October 13, 1931. She attended and graduated from Douglass High School in 1949. She committed her life to Christ and became a member of Wright Temple in Columbia Missouri where she chaired the Young Women’s Christian Council for over 30 years. Married twice, first to Carl Milton Bradford and later to Alonzo Beverly, her joy in life were her children. And she made sure her children had a strong foundation in Christ. She was employed as a cook at Alpha Phi Sorority on the campus of Missouri University for over twenty years. She also later worked for another fraternity on campus. Marjorie was also a licensed beautician. “Margie,” as she was known to family and friends will always be remembered as the matriarch of the Hayes-Harvey family. It is a title and reputation that was earned, not given. It was Margie who was there to care for her mother and father in their declining years, cared for her sister’s children Serita, Mark and Chrissa Key in their time of need. And it was at Margie’s table where all the family as well as local and visiting ministers often gathered for meals on Sunday afternoons before returning to various community churches for evening services. It was Margie who never stopped a life of giving and rarely asked for anything in return. Margie moved to Chandler Arizona in 2009 to be close to her children and grand-children. Margie transitioned to be with Christ on January 24, 2017, in Scottsdale, Arizona after a brief bout with a previous illness. These few words cannot contain the fullness, joy, love and charity that Margie spent a lifetime sharing with others. These qualities of her life remain among all who share and will cherish her memory. She was preceded in death by her parents and eight siblings (Sonny, Roland, May Helen, Odell, Gelores, Lloyd, Faye and Fern). She is survived by her brother Freddie Hayes of Fresno, CA and sister Janice Hayes-Avant of Jefferson City, MO. Also sharing her memory are her children Rosita Marie Moore-Jones (Indio, CA), Nolan Beverly (Chandler, AZ) and Marjorie Anita Beverly (Blythe, CA). Her memory will be cherished by 3 grandchildren, 4 great-grandchildren over 90 nieces and nephews and a host of hundreds of friends and relatives.

The family of Marjorie Rose Beverly created this Life Tributes page to make it easy to share your memories.

Send flowers to the Beverly family.