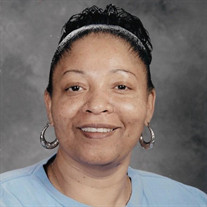 Marita Harris, 59, of Fayette, MO, passed away on Friday, December 3, 2021 at the University of Missouri Hospital. Funeral services will be held on Sunday, December 12, 2021 at the Faith Family Church in Fayette, MO as 2PM. Visitation will be from 1-2PM Sunday at the church. Services will be live streamed through the HT May & Son Funeral Home Facebook page and can be found at https://www.facebook.com/htmayfuneralhome. Marita Irene Harris, 59, of Columbia, Mo was born on June 12, 1962 to Elsie Johnson and William (Jack) Harris. She was also raised by her stepdad Charles Johnson Sr. She was the second oldest of six children. Marita grew up in Fayette, Mo where she attended high school and she lived with her grandmother. Mairta and her grandmother always had a very special bond as many granddaughters and grandmothers do. It was in high school when Marita first got into cosmetology and picked up the comb for the first time, and it soon became a skill she mastered quickly. She would braid the whole boys basketball team's hair before their games. She loved her friends growing up, she always had such a special bond with them, some of her best friends were Marilyn Estes and Nita Taylor. She didn’t live life much on the wild side but she was always down to have a good time whether it be walks, talks, dancing, or just laughing and enjoying each other’s company. She was one of the best friend’s any girl or guy could ever ask for. After graduating high school she moved around a little bit and ended up in Denver, CO at 24 years old she became a mother to her pride and joy, her twin boys Dantae and Shantae born on February 09, 1986. This was just the beginning to the mother, auntie, cousin, sister we all got to know. The bond that Marita had with her sons was an unbreakable bond. After spending some time in Denver, Co she moved back to Fayette, Mo. She raised her Nephew Cj Johnson and her nieces Aaliyah and Kenya Johnson, they all saw her as an auntie and a mother. She worked for Fayette Public Schools for years and took on the role of a foster mom to many kids. She ended her Career at the University of Missouri Hospital as a Direct Supervisor over the Dining and Nutrition hall, she loved all her patients, co workers. friends and family. She was especially close with her “Mother”. Oh how did Ms.Marita love her “Mother”, she used to always say “I love my momma, I don’t know what I would do without her. That’s my best friend”. Words can’t describe the love that was shared between these two but it was the infectious love that her and Mother shared with the family that created the unbreakable bond our family has for generations to come. On December 03, 2021 Marita Irene Harris was called home leaving to cherish her life, her mother Elsie Johnson, her children Dantae Harris, Daughter in law Karissa finn, Shantae Harris and Daughter in Law Leah Harris, CJ, Kenya and Aaliyah. Her Grandchildren Tae’ania, Tae’von, Lataeah, Taylin, TaeSen, TaeDen, ImanTae Harris, DeAndre & Kieron Kioh, Dominic & Mariah Finn & Tahj Bush. Her siblings Waymond Glasgow, Charles Johnson, James Johnson (deceased), Letetra, Antonio, Rhakia, JaQuan Jones, Carlos, Shadhi, Marietta Jackman, Michael McQuitty, Danny Harris, William (Junior) Harris, William (Thorny) Mckee (deceased), Renee Johnson & Dori Mckee.

Marita Harris, 59, of Fayette, MO, passed away on Friday, December 3, 2021 at the University of Missouri Hospital. Funeral services will be held on Sunday, December 12, 2021 at the Faith Family Church in Fayette, MO as 2PM. Visitation will be... View Obituary & Service Information

The family of Marita Harris created this Life Tributes page to make it easy to share your memories.

Marita Harris, 59, of Fayette, MO, passed away on Friday, December...