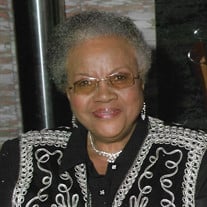 Marilyn Marshall, 85, of Columbia, MO, passed away on Tuesday, May 14, 2019, at University of Missouri Hospital. Services will be held on Wednesday, May 22, 2019, at 1:00 PM at St. Paul AME Church in Columbia. Visitations will be held from 5:00 PM to 7:00 PM on Tuesday, May 21, 2019, at the church and from 12:00 PM to 1:00 PM on Wednesday, May 22, 2019, at the church. Marilyn Delores Robinson Marshall, 85 was born September 29, 1933 in Columbia, MO to Ollie Mae Herndon and Ellis Robinson. Marilyn was educated at Frederick Douglas High School and graduated in 1951. She was employed at the University of Missouri-Columbia, Home Economics Department and retired after 32 years of service. Marilyn enjoyed many favorite TV shows, dining out, shopping (especially for sales). She liked preparing her children and grandchildren’s favorite dishes: gumbo, chicken wings, brownies and quiche. She also enjoyed preparing green beans and corn pudding . She looked forward to visiting her children and grandchildren during the holidays. Marilyn was a loyal supporter of the University of Missouri Tigers and was at one time a season ticket holder. Marilyn accepted Christ at an early age at St. Paul AME Church and was a life-long member. During her many years at St. Paul, she served as an Usher, on the Steward Board, Food Ministry and Women’s Day Committee. She was active with Church Women’s United for many years. In 1953, Marilyn was united in marriage to Billy Joe Marshall and they were married 56 years until Billy Joe’s death in 2009. To this union, three children were born: Arnetta Jean Marshall, Steven Duane Marshall and Belita Jo Marshall. Marilyn departed this life Tuesday, May 14, 2019 at the University of Missouri Hospital. She was preceded in death by her husband, both parents, mother-in-law Eugenia Wingo, two brothers, Floyd Logan, Jr. and Bobby Robinson and several aunts, uncles and cousins. She leaves to cherish her memory, daughter: Arnetta Marshall Marburgh, grandsons TaRon Marburgh (Cierra), Terrence Marburgh and Cleveland Marburgh, IV , great granddaughters Raziah and Rayven Marburgh of Kansas City, MO. Son: Steven Marshall (Patricia), grandson Trevor Marshall of Kansas City, MO. Daughter: Belita Marshall, granddaughter Diondra Tatum of Dallas, TX. First Cousins: Fred Smith, Sr. and Linda Trigg of Kansas City, MO, Charles Pursley, BoNita Muslim of Los Angeles, CA and many cousins she loved dearly. Sister-In-Law: Kaye Logan and nephew Darren Logan of Las Vegas, NV and great nephews in Las Vegas, NV and Houston, TX. She is also survived by her adopted son William H. (Piggy) Rogers, Jr.

The family of Marilyn Marshall created this Life Tributes page to make it easy to share your memories.

Marilyn Marshall, 85, of Columbia, MO, passed away on Tuesday,...

Send flowers to the Marshall family.