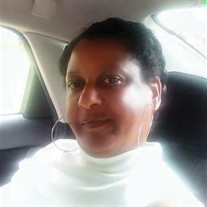 Margaret Buckner, 57, of Columbia, MO., passed away on Monday, June 11, 2018, at Boone Hospital Center. Funeral services will be held on Saturday, June 23, 2018, at H.T. May and Son Funeral Home in Columbia at 12:00 PM. Visitation will be from 10-12PM Saturday at the funeral home. Margaret Denise Buckner, sometimes called Neecee, was a loving mom, grandma, sister, and friend. The daughter of Maggie Lou and William Buckner Sr., she was born in Columbia, Missouri on Feb, 3 1961. She attended Rock Bridge High School and was a part of the class of 1979 . Margaret was a big social media fan. She thought it was the coolest thing to be able to talk to and look at pictures and videos on computers and phones. Her favorite one, of course, was Facebook. Every morning she would get up and tell all her friends good morning. The only thing that she liked more than Facebook was going across that bridge to Isle of Capri. But, her God given talent was braiding hair. She did her first head at the age of 12 and never stopped. Margaret was a people person. She was laid back and full of joy and energy. Both of Margaret's parents and a niece preceded her in death. Those left to grieve her passing and cherish her memories are: Three sons - Jermaine Buckner (Kansas City, Mo.), Donald Buckner and his wife Jasmin e. (Columbia Mo ); Robert Buckner (Columbia Mo.), Three sisters - Sheila Gavin (Kansas City) Yvonne Clark with Tommy Clark (Columbia, Mo.), Cherie Dudley Kemp (Columbia, Mo), Three brothers - Hilo Smith and Wife Theolia, (San Antonio , Tx.), William Buckner with wife Mariuska (Columbia Mo.), Gary Daye (Denver Co.), One Uncle - Charles Allen with wife Carolyn (Columbia Mo), 9 grandchildren, two step grandchildren, special friend Anthony Allen and many nephews and nieces.

The family of Margaret D. Buckner created this Life Tributes page to make it easy to share your memories.

Send flowers to the Buckner family.