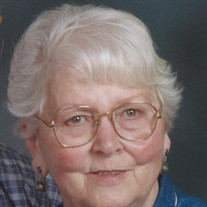 Margaret A. Berends, 83, of Columbia, MO., passed away Thursday, August 2, 2018 at her home with her husband, Max, of 63 years by her side. A memorial service will be held on Monday, August 13, 2018, at 2:00 PM at Broadway Christian Church in Columbia. Margaret Anna Berends was born October 6, 1934, to Roy and Dorothy Pearson in Washington County, KS., in Clyde, KS. She is survived by her husband Max, brothers Leroy(Pat)Pearson, Ralph(Glenda)Pearson, three children Lorrie Berends, Cindy Berends, and David(Ruth)Berends, grandchildren Samantha(Michael)Young, Jared(Jessika), Kristin(Mickey)Smith, Forrest, Zachary, Luke, Daniel, Joshua and Coltan Berends. She is also survived by nine great-grandchildren and one great-great-grandchild. Margaret was a devoted wife, mother, and grandmother and will be greatly missed. Margaret received her B.S. degree in Home Economics and Economics and Education from Kansas State University in 1956. Margaret also had graduate hours in dietetics from the University of Missouri-Columbia. She was Kansas State Assistant Dietitian of Residence Halls and Administrative Assistant at various healthcare centers. She was the first Executive director of Meals on Wheels, 1976-1980. She later worked for the University of Missouri, retiring in 1998 after 14 years. For many years, Max and Margaret were active camp hosts for the Missouri State Parks. They were also Friends of Rock Bridge State Park. She was a member of the Broadway Christian Church. Margaret enjoyed visiting and taking flowers to the elderly and homebound. Margaret also enjoyed the evenings with Max. She guided her family with a firm voice and words of wisdom, leaving a legacy through her children and grandchildren. Memorial contributions are suggested to the Meals on Wheels program of Columbia or Woodhaven.

The family of Margaret A Berends created this Life Tributes page to make it easy to share your memories.

Send flowers to the Berends family.