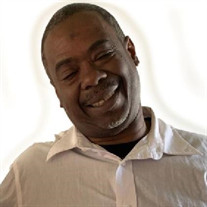 Marcus McDonald, 54 of St. Charles, MO, passed away on Monday May 27, 2019 at St. Joseph Hospital in St. Charles. Funeral Services will be held on Saturday, June 8m 2019, at Mt. Zion Baptist Church in St. Charles, MO at 12:00 PM. Visitation will be from 11-12 PM Saturday at the church. Visitation will also be held on Friday, June 7, 2019 at Progressive Missionary Baptist Church in Columbia, MO., from 5-7PM. Marcus La’Rue McDonald was born February 2, 1965 to Norma Jean McDonald and Burlan Thomas in Columbia, MO. He attended Columbia public schools until he graduated from David H. Hickman in 1983. He spoke often of attending St. Luke Ame Church with his grandmother, Winifred McDonald at an early age. He served next to his wife at Mount Zion MB Church Clothing Ministry and volunteered for the food pantry when able. He knew the lord, although he didn’t actively belong to a congregation. During his younger years, he participated in several community activities, the Blind Boone Drill Team, which he was said to be one of the first drummers, and traveled all over Missouri. His Special Olympics events consisted of several track and field events and basketball, and we’ve heard multiple stories of his Bear Creek Park and Rec days, as well as his love for music and dancing. Although Marcus suffered from Sickle Cell Anemia, he did not let that hinder him for caring for his family. He was a drifter in Columbia at several jobs for Shelter Insurance, Houseman at several sororities and fraternities on Mizzou campus, temporary agent, breakfast cook at Ramada Inn and his final job in Columbia was a dishwasher at Conte’s on the Lake. In 2003, Marcus moved to St. Charles, MO, with his family and was employed by his good friend, Buell Cook, at Pasta House for 16 years. On June 11, 1987, he was walking down Fifth Street in Columbia when he met Kerry Lynn Wright, whom he made his wife on June 14, 1997. To this union, they had two sons, Markez and Marquis. He is preceded in death by his mother, Norma Jean Roland, his grandmother, Winifred McDonald, his grandfather, George Edward McDonald, his brothers, John Gray and Andre Roland and his uncles, John Stapleton and Raymond Acie McDonald. He leaves to survive, his memory, his wife, best friend, confidant and lover, Kerry Wright McDonald; his only “Baby Girl” Resa McDonald of Texas, Marcus McDonald of Texas, Markez and Marquis of St. Charles, nine grand children, Zaniah, Paige‘Sha, Makenzi, Jordan, Ka‘Mya, Isaiah, Ashton, Ariana, Adriana and his one and only, “Tink” Deltreace Robinson, matriarch and patriarch aunt Mercedes and uncle Robert Scott, his sibling Monique Thomas of Columbia, Racquelle Partee of Texas, Christian (NaTasha) Lewis of Texas, Deborah Varderman of Columbia, his aunt Betty Coleman Wilson of Columbia, Ruth Davis of Columbia, uncle Donnie Warren of Columbia, uncle William Chambers of Columbia, brother and sister-inlaws Paula Wright, Jerry Wright, Joy Bryant, John (Alicia) McCaleb, Reverend Melvin (Denice) McCaleb of St. Charles and a host of nieces, nephews, cousins and other loved ones.

The family of Marcus McDonald created this Life Tributes page to make it easy to share your memories.

Marcus McDonald, 54 of St. Charles, MO, passed away on Monday...

Send flowers to the McDonald family.