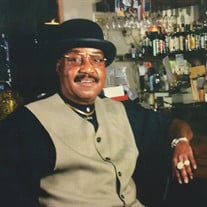 Louis C. Nelson Sr., 74, of Columbia, MO., entered into paradise on Monday, July 23, 2018, at the Bluff Retirement Center. Funeral services will be held on Saturday, August 4, 2018 at Missouri United Methodist Church at 1:00 PM. Visitation will be from 11AM-1PM Saturday at the church. Louis Cecil Nelson Sr., AKA “Lou” was born on September 7, 1943 to the late Solomon and Eula Mae Nelson in Deventer, MO.   Lou is preceded in death by the mother of five of his children, Patsy D. Edwards-Nelson, daughter Cynthia R. Nelson and a grandson Tevin K. Nelson, three brothers, three sisters and a great-grandson Amari K. Nelson.   Lou was baptized at St. Paul AME Church, where he was a member until his death.   Lou worked at Columbia Brick Company (Fellows), Columbia Police Department, City of Columbia and Trailways Bus Company. He also volunteered with the late Almeta Crayton with “Everybody Eats” Program on Thanksgiving to insure that everyone that needed a meal would have one on this day. For over thirty years he was the proud owner of “Lou’s Palace” where he never met a stranger and when you entered you were treated as part of the family. With his quick wit and his contagious smile you were guaranteed a time filled with laughter. When it was time to leave he would tell you to come back and see him because: “ LOU LOVES ERRBODY” Lou also loved his MISSOURI TIGERS, whether it was basketball or football. He was always there cheering his BOYS on.   Lou leaves to cherish his memory his significant other of the home for 33 years, Janie Madison, his daughters Trinia, Kimberly, Jessica all of Minneapolis, MN., LaDonna of Kansas , Kendra of Columbia, MO., and Quinn (Mark) of Chicago, IL, sons Louis Jr. (Debbie) of Columbia, MO., Stacy (Dawn) of Columbus, OH., and Marcus Warren (LaKeya) of Charlotte, NC, his sisters Ruby (Hershal) Scott of Mexico, MO., Katherine (Willie) Davis of Monroe, GA., and Mary Gillespie of Columbia, MO., his brothers Solomon Jr. of Michigan City, IN., Johnny Nelson of Mexico, MO., and a host of grandchildren, great-grandchildren, nieces, nephews, cousins, and friends.

The family of Louis C. Nelson Sr. created this Life Tributes page to make it easy to share your memories.

Send flowers to the Nelson family.