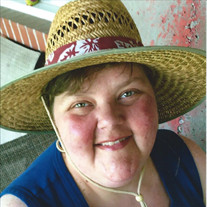 Linda Jean Berry Tackett, 40, of Columbia, MO., formerly of Centralia, MO. , was welcomed into eternity on Friday, December 9, 2016 at University of Missouri Hospital in Columbia. Funeral services will be held on Thursday, December 15, 2016 at H.T. May and Son Funeral Home in Columbia at 1:00 PM. Visitation will be from 11-1 PM Thursday at the funeral home. Linda was born on April 3, 1976, in Mexico, MO., the daughter of Lindell and Esther Decker Berry. She leaves to cherish her memory her mother Esther Berry of Columbia, MO., two sons Andrew Berry( Kaitlin Williams), of Leavenworth , KS., and Jonathan Richmond of Columbia, MO., one daughter Alexis Berry(Laianna Williams) of Columbia, MO., two sisters Shawn Venable of Jefferson City, MO., and Lori Walton of Mexico, MO. and two nephews Alexander Berry of Jefferson City, MO., and Ian Walton of Columbia, MO. She was preceded in death by her father LIndell Berry, her grandparents Lee and Blanche Decker and Harry and Ann Berry and her aunt Lois Jean Schneller.

The family of Linda Jean Tackett created this Life Tributes page to make it easy to share your memories.

Send flowers to the Tackett family.