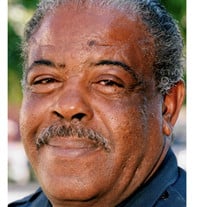 Levoy City, 81, of Sedalia, MO, passed away on Saturday, March 23, 2019, at his home. A visitation will be held at 2:00 pm on Thursday, April 4, 2019, at Alexander-May Funeral Home in Sedalia. “Jack” Levoy City, 81, of Sedalia, Missouri went home to be with the Lord on March 23, 2019 after a brief battle with cancer. He passed away peacefully at home surrounded by family. Jack was born in Taylor, Texas on March 21, 1938 to the late Georgia and Sina City. He graduated from Carver High School in Georgetown, Texas. He served in the Air Force. After the Air Force he became a police officer with the Sedalia, Missouri Police Department. He retired from the police force after 32 years of service. Jack's favorite activities were spending time with family, cooking and participating in bass fishing tournaments. He is survived by April Bassett of Sedalia, Missouri; one daughter: Alexis Bassett of Sedalia, Missouri; two sons: Kendell Levoy City (Regan) of Scottsdale, Arizona and Cory Matthew City (Ryane) of Sedalia, Missouri; two sisters: Edna City of San Antonio, Texas and Etta Faye City of Chesapeake, Virginia; three brothers: Lee Louis City and Albert City of Georgetown, Texas and Lester City of Humble, Texas; three grandchildren: Sidnee Grace, Huxlee Irie, and Elvree Fin of Sedalia, Missouri; an aunt, nieces, nephew, many cousins and friends. Jack will be loved and greatly missed by all who knew him.

The family of Levoy City created this Life Tributes page to make it easy to share your memories.

Send flowers to the City family.