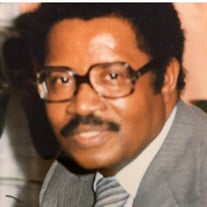 Leutenus Williams, 88, of Columbia, MO, passed away on Saturday, February 19, 2022. Services will live streamed on Saturday, February 26, 2022 at 3PM on Zoom: https://bit.ly/3LYhsRR Leutenus Williams was born August 26, 1933, in Columbia, MO as the oldest son of George and Ethel Mae Warren-Williams. On November 22, 1953 he married the love of his life, Carrie B Williams. They shared 61 and ½ years of marriage that produced a beautiful legacy. Shortly after he was married he was drafted into the US Army where he served as a Private First Class. He was honorably discharged May 25, 1955. Mr. Williams was a long-time, proud member of the Jehovah's Witnesses. He was baptized July 16, 1960. He witnessed to thousands of people and became a loving Elder in the ministry. Even in his last days and moments he was faithful to Jehovah. Leu (as he was called by many) had several professional endeavors from driving an ambulance to lawncare, however his prize business was “Leu's Professional Cleaning Services". He prided himself for working into his 80’s. He leaves to cherish his memory: Three daughters: Laverne Mosley (Jack) of Coolidge, AZ, Beverly Bell and Gale Williams-Murria both of Garland, TX, Two Sons: Terry Williams (Angel) of Pensacola, FL, and Charles Menifield (Angela) of Newark, NJ. Three siblings: brother John Williams of Columbia, MO, and two sisters Rena Richardson and Betty Ann Butler, both of Columbia, MO. Six grandchildren, ten great grandchildren and dozens of spiritual sons and daughters. He was preceded in death by his wife, Carrie B. Williams. His parents George and Ethel Williams. Siblings James Williams, Edward Williams, Lula Mae Kemp, Georgia Rose Redden, Ethel Ruth Powell and one granddaughter Stacy E. Williams.

The family of Leutenus Williams created this Life Tributes page to make it easy to share your memories.

Leutenus Williams, 88, of Columbia, MO, passed away on Saturday,...