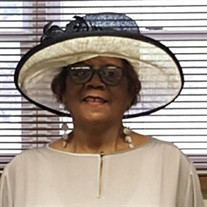 Lealure Tindall, 74, of Fayette, slept into the arms of Jesus on Saturday, September 23, 2017, at her home. Funeral services will be held on Saturday, September 30, 2017, at 12 PM at St. Paul United Methodist Church in Fayette. A visitation will be held on Friday September 29, 2017, from 5-7 pm at St. Paul United Methodist Church in Fayette. Lealure D. Alvis Tindall, born the second of five children to the late David L and Margaret (Banks) Alvis. Born June 5, 1943, in Fayette, Missouri, she attended Lincoln Public School up to the 10th grade, where she then moved to Fayette High, graduating in 1961. At an early age, Lealure professed her love for the Lord, being baptized at St Paul United Methodist Church. As an active and dedicated member, Lealure served on several committees always there to help and enjoy the company of others. A lifelong resident of Fayette, Lealure was very active throughout. She believed in being and staying involved. She worked wth the Lincoln Public School Committee, the Juneteenth Planning Committee, Administrative Chair for St Paul's Administrative Council, former PTA President at Fayette High School, community liaison, Chairperson for Black Methodist Church Renewal (BMCR), staff advisor for the African American Student Union at Central Methodist University and several others, just too many to list. After a semester or two at Stephens College in Columbia, Lealure began her long career at the University of Missouri spending a total of 39 years at MU, with 30 of those years working at the School of Social Work, where she received numerous awards and recognition. After retiring from Mizzou, Lealure stayed involved by finding employment in the College of Graduate and Extended Studies program at Central Methodist University, which she loved. She loved the people she worked with throughout the years! Lealure was proceeded in death by her mother and father, Margaret and David Alvis, along with twin brother and sister, David and Diane Alvis, and one grandchild Tyson Tindall. She leaves to cherish her memories her three sons, Darren and Douglas both of Fayette, and Dwayne (Krishna) of Vacaville, California. She also leaves two sisters, Janice Eubanks of Fayette and Sharon Alvis of Columbia. 14 grandkids, 13 great-grandkids and a host of nieces and nephews.

The family of Lealure Tindall created this Life Tributes page to make it easy to share your memories.

Lealure Tindall, 74, of Fayette, slept into the arms of Jesus...

Send flowers to the Tindall family.