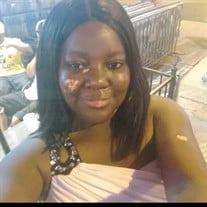 Latorya Jones, 36, of Boonville, MO, passed away on Sunday, March 21, 2021 at the University of Missouri Hospital. Funeral services will be held on Saturday, April 3, 2021 at the H.T. May and Son Funeral Home at 2:00 PM. Visitation will be from 12-2 PM Saturday at the funeral home. Latorya Lynn Jones was born on December 23, 1984. Tory as she like to be called by her family also Johnny Bob by her brother. She spent a majority of her time serving her son D'aVion "Momo" Jones. She loved her family with her whole heart. Tory joined the Pilot Grove Baptist Church at a young age, later on in life she changed her membership to the Morgan Street Baptist Church in Boonville, MO. Tory loved to cook. She especially loved to cook big Sunday dinners. She was an avid NFL watcher, her favorite team was the Denver Broncos. She would call it football Sunday. It didn't matter who played, she would watch the game anyway because she loved the game that much. Tory was employed at the Braun Home in Fayette, MO, the Isle of Capri in Boonville, MO. She was also employed at Sisters of Supportive Living also in Boonville, MO. Tory loved assisting the elderly. She had a huge heart and her smile was so calming that she had a big impact on her residents. Tory was a graduate of the 2003 class at the Pilot Grove High School. She was a member of the FFA Chapter and also played fast pitch softball, where she played the position of catcher. When she grew older she was also a member of the family softball team. Toy leaves to cherish her memory her son D'aVion (Momo) Jones, her brother Jeffery(Shantay) Jones, of New Franklin, MO, her two sisters Sebillya(Tori) Jones of Sedalia, MO, and Stephanie (Terrell) Gardner of Boonville, MO, three aunts Jackie Jones, Kathryn Jones and Theresa (Greg) JOnes, two uncles Timothy Jones and Robert(Sharon) Jones both of Boonville, MO and a host of nieces, nephews and cousins. Latorya was preceded in death by her mother Veronica Jones, grandparents Josephine and Joseph Jones, her aunts Rebecca Jones, Patricia Jones Kemp and Mary Perry ,her uncle Larry Perry and her cousin Carol Sue Jones Harris.

Latorya Jones, 36, of Boonville, MO, passed away on Sunday, March 21, 2021 at the University of Missouri Hospital. Funeral services will be held on Saturday, April 3, 2021 at the H.T. May and Son Funeral Home at 2:00 PM. Visitation will be... View Obituary & Service Information

The family of Latorya Lynn Jones created this Life Tributes page to make it easy to share your memories.

Latorya Jones, 36, of Boonville, MO, passed away on Sunday, March...