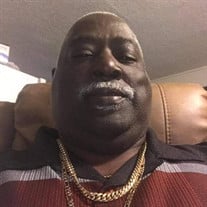 Larry Neal Perry, 69, of Boonville, slept into the arms of Jesus on Monday, November 26, 2018 at his home. Services will be held on Saturday, December 8, 2018 at 1 PM at Morgan Street Baptist Church in Boonville. Visitation will be from 10 AM to 1 PM at the church on Saturday. "Have I not commanded you? Be strong, and of good courage; do not be afraid, nor be dismayed, for the Lord Your God is with you wherever you go. Joshua 1:1-9 Larry Neal Perry-Estill of Boonville, Missouri, entered into eternal happiness with God on Monday, November 26, 2018. He was surrounded by his family who deeply loved and cared for him. Larry was passionately devoted to this faith and spent most of his time serving his family and friends. Larry was born October 1, 1949, in Kansas City, Mo to the late Josephine Perry and the late Harold Estill. He loved his mother and the man who he later learned to call his “DADDY," the late Mr. Joseph C. Jones. His Christian journey began at Bethel Free Will Baptist Church in Blackwater; Mo under the pastorage of the late Reverend J.R. Mitchell where he joined in 1967. As musician for Bethel FWB Church for many years before moving to Des Moines, IA. There he joined the Mount Hebron MBC under the pastorage of the late Pastor James McKinley Harris and Larry served as Minister of Music for over twenty years before moving back home to Boonville, Mo. He played for and taught many different churches and choirs over his fifty years of service in the Music Ministry Many memorable notes were learned from such great musicians as Mother Sadie Bruce, Sister Samantha Williams, the late Mrs. Thelma Van Buren-Conway and others. Larry joined the United States Army in 1968 and served a one-year tour of duty in Vietnam serving as a Military Police Officer, He was honorably discharged February 1970 and began working over twenty years for many different Federal Government Agencies over his twenty years in Chicago, Illinois and lastly, in Des Moines, Iowa. His last employment in Des Moines, Iowa was with the Internal Revenue Service. Larry leaves to celebrate and cherish his memories, 3 sisters, Ms. Jacquelyn D. Jones, Ms. Annie Jones and Ms. Theresa Jones, all of Boonville, Mo; 2 brothers, Mr. Timothy Jones and Mr. Bobby Jones, both of Boonville, Missouri; 6 Aunts, Mrs. Esther Mae Ellis-Perry and Mrs. Maxine Perry, both of Boonville, Mo, Mrs. Veola Perry, Mrs. Sebelia(Cornelius) Black and Mrs. Martha(Bill)Vincent, all of Des Moines, Iowa, and Ms. Virginia Lewis of Kansas City, Mo; 2 Uncles, Mr. Albert(Lilly) Pierce. Kansas City, Mo and Mr. George Perry, Pilot Grove, Mo; a host of nieces, nephews, and cousins, many other relatives and numerous friends. Larry joins his Mom, Dad, Stepdad, Brother, Sisters and niece who has preceded him into eternal life.

Larry Neal Perry, 69, of Boonville, slept into the arms of Jesus on Monday, November 26, 2018 at his home. Services will be held on Saturday, December 8, 2018 at 1 PM at Morgan Street Baptist Church in Boonville. Visitation will be from 10 AM... View Obituary & Service Information

The family of Larry Neal Perry created this Life Tributes page to make it easy to share your memories.

Larry Neal Perry, 69, of Boonville, slept into the arms of Jesus...