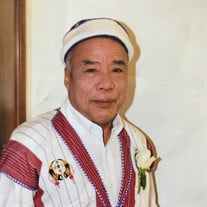 Kye Win, 69, of Columbia, MO passed away on Wednesday, May 13, 2020 at his home. A visitation will be held from 11:30 AM to 12:00 PM at Midway Heights Baptist Church. Funeral services will be held at 12:00 PM at the church. Kye Win, 69, of Columbia Missouri, died May 13, 2020 at his Midway area home. Mr Win was born June 10, 1950, in a small town in Myanmar (Burma), Southeast Asia, to his parents Yeh Say and Nyaw Mu. He lived in Burma until 1997, when he was forcibly relocated to a refugee camp on the border of Thailand. In 2010, he moved with his family to Columbia as a refugee, and became a US Citizen in January 2016. He enjoyed hunting, farming, and being outdoors, and was a skilled musician with the guitar and harmonica. He is survived by three brothers, all in Burma, and two sisters, one of them in Burma and one in Texas. He has a large family of his own, including three sons and two daughters and their families in Columbia. He also has a son and daughter still living in Thailand. Altogether Kye has twenty-four grandchildren. He was preceded in death by his parents, and his wife, Say Nay. Kye was a strong and caring father and grandfather, and will be greatly missed by all who knew him and loved him. His family takes comfort in knowing that he is now with his Savior and Lord, Jesus Christ, in Heaven. Arrangements are with HT May & Sons Funeral Home.

The family of Kye Win created this Life Tributes page to make it easy to share your memories.

Send flowers to the Win family.